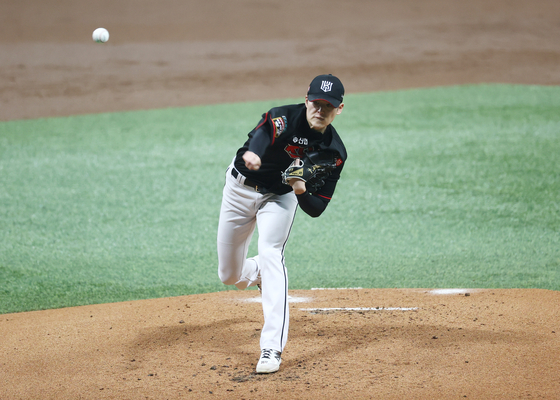 KT Wiz pitcher Bae Je-seong throws a pitch during the second round of the playoffs against the Doosan Bears at Gocheok Sky Dome in western Seoul on Nov. 13. [YONHAP]


Between 2018 and 2019, KT Wiz pitcher Bae Je-seong quite literally went from zero to hero, turning a blank pitching record into 10 wins in a single season.

Having undergone a surgery in high school, Bae had close to no records in his last year as an amateur. Despite that, he still registered himself onto the draft and was picked up by the Lotte Giants during the 2015 KBO Rookie draft.

Although he didn’t have any records to show, Bae was drafted as the Giants’ scout saw potential from his physicality. Standing at 1.89 meters (6 feet, 2 inches) tall, the Giants scout believed that Bae could become a force to be reckoned with in the KBO.

Despite that belief, Bae wasn’t able to live up to expectations and never made it into the Giants starting squad, leading to him being traded to the Wiz in 2017.

Despite appearing in a total of 24 games in his first two seasons with the Wiz, Bae still didn’t have a single win, loss, save or hold. However, by 2018 he was showing some potential and was selected as an All-Star in the Futures League.

Bae earned an unexpected opportunity to appear as a starter in 2019 when the Wiz’s foreign pitcher had to rest due to shoulder pain. His first wasn’t great as he gave up four runs throughout five innings with a 7.20 ERA against the NC Dinos.

Despite that rocky start, he was promoted to starter for a game against the Doosan Bears on May 22. And the rest is history — Bae went on to pick up 10 wins and 10 losses throughout the 2019 season to end with a 3.76 ERA.

A year later he did it again, picking up 10 wins and seven losses to finish the season with a 3.95 ERA.

As far back as he can remember, Bae says that baseball has always been around him.

“My father was set on having a baseball player if he had a son,” Bae says.

Before attending elementary school, Bae always played catch with his father. Once he started going to school, his father made sure to send him to a school that had a baseball team.

“So that’s how I started playing baseball,” Bae says.

Bae may not have had much choice about starting baseball, but he kept on playing because he saw the fun in the sport.

“Since I was so young, at the very beginning, it wasn’t my choice,” Bae says. “But as I kept on playing baseball, I wanted to play better. And as I started to work harder, I started to feel a sense of achievement. Starting in middle school, I also started to think that this is my path.”

Just like most other baseball players, Bae tried his hand at both pitching and hitting when he was younger. Although he liked both positions, he says that he chose to be a pitcher as he saw more potential there.

To this day, Bae still wears the No. 19, the very first number he was assigned back in elementary school. Since he has been wearing the number for so long, he always dreamed of wearing No. 19 and pitching in the big league.

In middle and high school, Bae was never really an outstanding player. He struggled with injuries that prevented him from playing and found it hard to focus on his dream of going pro.

“There was never a time when I thought, ‘Why am I doing this,’” Bae says. “But I didn’t play well and had a lot of injuries back in middle and high school. I did question myself as to whether it was the right path for me. But deep down, I had a strong determination that I wanted to become successful.”

For any athlete, the last year or two of their amateur career is the most important, as it determines whether they actually have a future in the sport. But during that time, Bae faced an unexpected injury that forced him to surgery.

“Third grade in high school is probably the most important because that’s when your career is decided,” Bae says. “I was bearing the pain, but it hurt too much that I went to the hospital. [When I got checked,] I found that my bone was broken from a stress fracture. So I underwent surgery and wasn’t able to play a single game for that season.”

Right when he was about to lose all hope of turning pro, he was given an unexpected opportunity as the Giants drafted him.

“The Giants’ scout at the time used to be a coach at Sungnam High School," Bae says. "He said I have great physical form and I'm a hardworking player. It was great news for me.”

The news came just in time for Bae, as he was already thinking about going to the military first and joining the pros through a qualifying test later. As he had no stats to show to the scouts, Bae was already trying to think of creative routes to reach the KBO.

When he first joined the pros, everything was different.

Of the many improvements, Bae says that he saw a big improvement in the speed of his pitches. Back when he was an amateur, he wasn’t throwing especially fast pitches, but that quickly changed when he joined the Giants.

“I think I was able to develop my own strengths,” Bae says.

Despite seeing improvements, Bae never really had a career with the Giants as he never once pitched for the team in two season with the club.

“I joined the club by getting drafted really late,” Bae says. “I didn’t really get attention because the players who got drafted ahead of me got more attention. But I was lucky with the coaches because they still took care of me and helped me. I was able to increase the speed of my pitches and got better physically, but I was at my weakest mentally, which is considered the most important.”

Since Bae was never an outstanding player in middle or high school, he had never really developed a sense of how to pitch against specific batters or how to control the game.

“I don’t think I was at all ready to play in the top tier,” Bae says.

If you’re a professional, getting traded is never really a good thing as it means you’re not included in the club's protected entry.

“I thought a trade was someone else’s story,” Bae says. “I never thought it was me. The only thought I thought about was playing well at Sajik Baseball Stadium. But one day I got a call and was told to leave the next day. I couldn’t really believe it. But I started to think that the Giants had given me an opportunity and KT wanted me because they needed me. So in the end, I was just grateful to both clubs.”

Once he joined the Wiz, Bae was immediately added to the roster and finally got to play in the KBO. When he first joined the Wiz, he had a sense of confidence that came out of nowhere, that he could pitch just like anyone else if he got the opportunity.

But he was wrong.

But having tasted the KBO in 2017, Bae now knew what he was working for. He spent the 2018 season in the Futures League working to make it back to the big stage. To do that, he had to improve his mental game.


“It wasn’t something that I could overcome in a day,” Bae says. “There were a lot of external factors. It’s not like I got better just by telling myself to get better. Honestly, I got a lot of help from people around me. Keeping in mind the advice I got from older players and coaches, I was able to get better one step at a time.”

The help Bae received from the coaches in the Futures League in 2018 was another turning point for him. Rather than rushing back to the KBO, he patiently waited for his chance and focused on playing well in the minor league.

That chance came in 2019, when his patience finally paid off. Not only did Bae spend his first full-time season in the KBO and pick up 10 wins, he also managed to toss a complete game in his very last start of the season.

The complete game — ironically against the very Giants that had shown him the door two years earlier — was his 10th win of the season and first-ever complete game. He gave up only one walk, no runs and no hits throughout nine innings to finish with a resounding 0.00 ERA.


Including the games Bae pitched in the Futures League, he’s seen a lot of action by now. At the beginning of every game, the young pitcher says that he feels some nerves, but he also gets excited and feels like he’s floating.

To quite literally keep himself grounded, Bae squats before he gets on the mound at the start of every inning. He says this helps him calm down and bring him solidly back down to earth.

“When I squat, the weight [of my body] goes down toward my lower body,” Bae says. “And I’m able to stabilize my breath. To start every inning calmly, I squat to lower my weight to my lower body. Otherwise I have too much strength in my upper body. I also learned that I have to be calm when I pitch.”

The 2020 season was an unforgettable one for the Wiz. They advanced to the postseason for the first time in the club's history and finished second in the regular season standing with a record of 79 wins, 1 tie and 62 losses.

But Bae says he has mostly regrets as his team was eliminated from the playoffs on the day he started.

“Honestly, I had high expectations and I prepared a lot,” Bae says. “I don’t know what other people think, but for me, I was very confident [that day]. But I wasn’t able to stay in the game long, so I had a lot of regrets.”

Although Bae believes that he did better in the 2019 season based on his own performance, he is more proud of the 2020 season because he started to struggle midseason and was able to overcome it.

“Starting from halfway through the season, my pace and my balance started to go,” Bae says. “Getting through that process was really difficult mentally. Since I’m a pitcher who starts off the game, I just had to pitch although all those things were off. I want to give myself more credit for being able to pitch through it all. It was a good experience.”

Bae has one especially unusual statistic this year — he tends to start pitching better after his first 50 pitches.

It’s not that Bae is counting to 50 pitches, as he focuses on one batter at a time, but that big 50 is invariably where his pitching starts to stabilize. Bae says he tries not to think about the number because he doesn't want it to become a habit.

In every game, Bae always tell himself to be calm as getting excited has never given him the result he wanted. While keeping calm throughout the game, he always reminds himself to be confident as well.

Moving forward, Bae has a simple goal: To be the best.