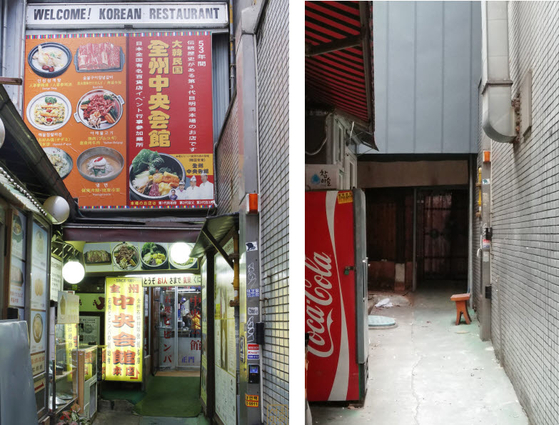 
Small businesses have been devastated by the pandemic, so much so that even some of the classics — much beloved, decades-old mainstays — have been forced to close.

Jeonju Jungang Restaurant, a 46-year-old bibimbap (rice mixed with vegetables) landmark in Myeong-dong, central Seoul, shut sometime over the summer, the alleyway which led to its entrance now occupied by a lone Coke machine. A three-generation family business, the Seoul Metropolitan Government recognized its value and once selected it as a “Seoul Future Heritage” site.

Seoul Future Heritage sites are notable historical sites or works of art the Seoul Metropolitan Government hopes to preserve. A total of 470 sites and “objects” have been selected so far, including the Seoul Station Overpass, now Seoullo 7017, and Last Stop Mapo, a song.

A 58-year-old table tennis club, which was opened in Sinchon, western Seoul, in 1962, is another historic victim of the pandemic. 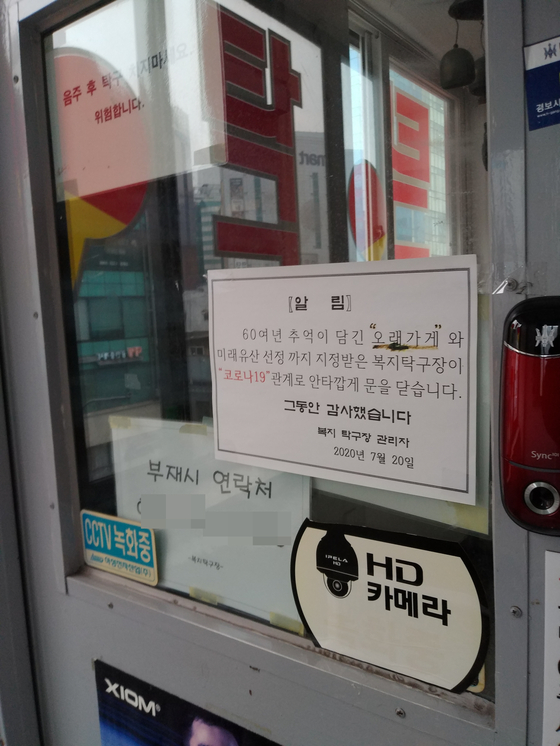 A sign at a table tennis club in Sinchon, western Seoul, says that the club closed its business on July 20 amid the prolonged coronavirus pandemic. [SOHN HAE-YONG]


Located in Sinchon, the hub for Yonsei University, Ewha Womans University and Sogang University, the table tennis club was loved by many students and local residents for more than 50 years. It was chosen as one of the Seoul Future Heritage sites in 2015.

The table tennis club “is a symbolic place full of memories of people of all ages,” Lee Yoon-ja, 70, a manager of the club, said. “The day we closed the club was one of the saddest day of my entire life.”

With many businesses vanishing, the vacancy rate for medium and large-sized commercial buildings in major commercial areas in Seoul has been increasing rapidly.

According to Korea Real Estate Board, the vacancy rate for medium and large-sized commercial buildings in the Gwanghwamun area in central Seoul was about 3.7 percent in the fourth quarter of last year, but rose to 9.3 percent in the third quarter of this year. During the same period, the vacancy rate for commercial buildings near Gangnam Daero, southern Seoul, jumped to 16.4 percent from 4 percent.

The number of self-employed workers has been declining as a result, a sign that small, one-man bands and mom-and-pops are winding up. According to data compiled by Statistics Korea, there were about 5.52 million self-employed people in Korea as of November. That is a 59,000 drop compared to the same month a year earlier. 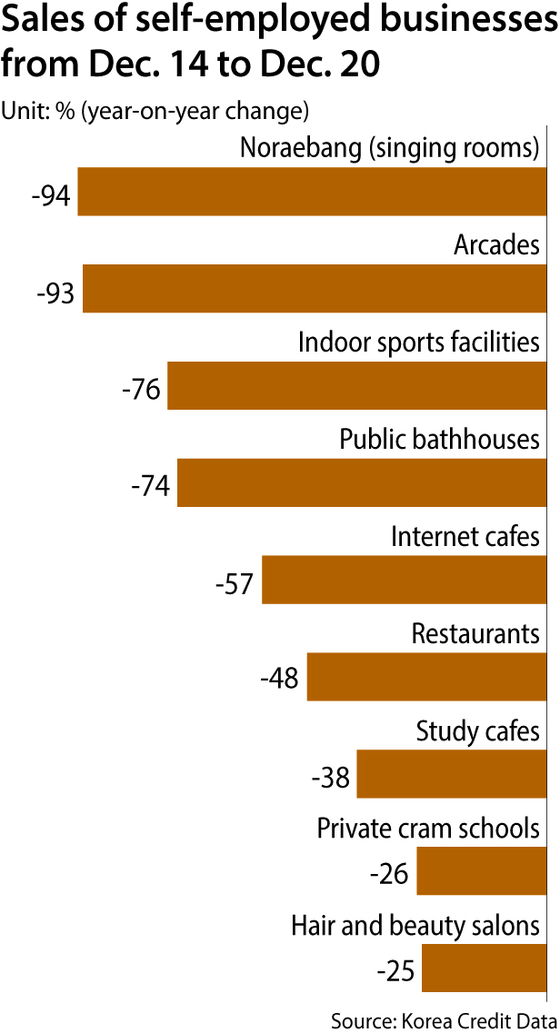 Fewer part-time workers are being hired.

Amid the pandemic, business owners no longer hire employees or part-time workers in order to reduce the labor cost, according to Statistics Korea.

“The Covid-19 outbreak was another shock to self-employed people who have already been suffering from the hike in the minimum wage and the prolonged recession,” said Sung Tae-yoon, an economics professor at Yonsei University. “As Korea is a country with a relatively high number of self-employed people, the increasing number of owners closing their businesses means a decrease in employment and decline in consumption, leading to a vicious cycle.”

To survive the Covid-19 pandemic, some self-employed people are going heavily into debt.

Debt incurred by self-employed businesses reached 755 trillion won ($691 billion) at the end of the first half of the year, up 70 trillion won from the end of last year, according to the Bank of Korea.

During the first half of the year, 382,000 self-employed people borrowed money from banks. That is roughly three times more than the number of people who borrowed money in full 2019, which was about 144,000.

As Christmas and year-end gatherings and parties are being canceled, small businesses have yet another reason to worry. December is known to be the month in which many consumers spend money celebrating the end of the year and beginning of the next year.

According to Korea Credit Data, sales of 660,000 small businesses across the country in the third week of December were down 32 percent compared to the same period a year ago. In Seoul, it declined by 43 percent.

“While companies maintain the number of existing positions, more companies should be established so that there can be more new job opportunities,” Jung Yeon-sung, a professor who teaches business administration at Dankook University, said. “Preventing the unemployed and retirees from becoming self-employed is the most realistic way to solve the current situation.”