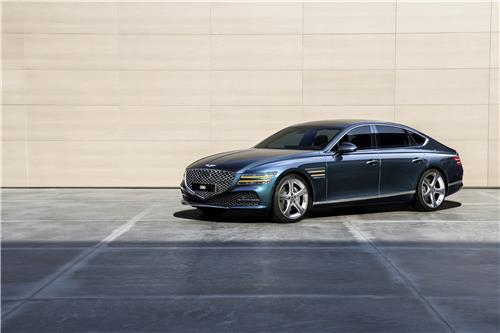 A fully overhauled Genesis G80 midsize sedan, which was rolled out in Korea in March. [YONHAP]

Genesis is set to become Korea’s best-selling luxury car this year for the first time since it was introduced as a standalone brand by Hyundai Motor in 2015.

Korea's luxury car market, which didn't have a homegrown brand before Genesis, has been dominated by German brands, with Japanese brands scoring some share.

Genesis sold a total of 96,069 units this year as of November, up almost 85 percent year-on-year, according to Korea Automobile Manufacturers Association data.

Mercedes-Benz, which unloaded the most imports in Korea for four consecutive years, sold a total of 67,333 units during the period, a 3.4 percent year-on-year drop, according to data from Korea Automobile Importers & Distributors Association.

BMW, another contender in the luxury car market, sold 52,644 units as of November this year, a 34.8 percent year-on-year jump.

Genesis sales in Korea were led by the G80 sedan and the GV80 SUV.

A fully overhauled G80 midsize sedan was brought to market in March, and 46,453 units were sold as of November. Sales of the GV80, which was rolled out in January and is the first Genesis SUV model, totaled 30,745 units as of November.

Genesis had its growing pains over the past few years as it struggled to separate from the brand image of Hyundai Motor, which is known for value-for-money vehicles. Consumers looking for luxury vehicles leaned more toward imported models rather than purchasing Genesis cars given that the prices didn't differ that much.

“The design has gone to a top-notch level over the past five years, and Korean consumers are starting to accept the brand as a luxury one rather than something related to Hyundai Motor,” said Kim Pil-soo, an automotive engineering professor at Daelim University.

The recently premiered GV70 is being well received too. More than 10,000 orders were received for the second Genesis SUV on Dec. 23, the first day it was made available. Deliveries will begin in January.

While Korean consumers are increasingly convinced by the brand, a bigger challenge awaits Genesis, as its performance in the United States, one of the most important luxury auto markets in the world, is not solid yet.

Genesis hasn’t yet started selling cars in Europe or China.