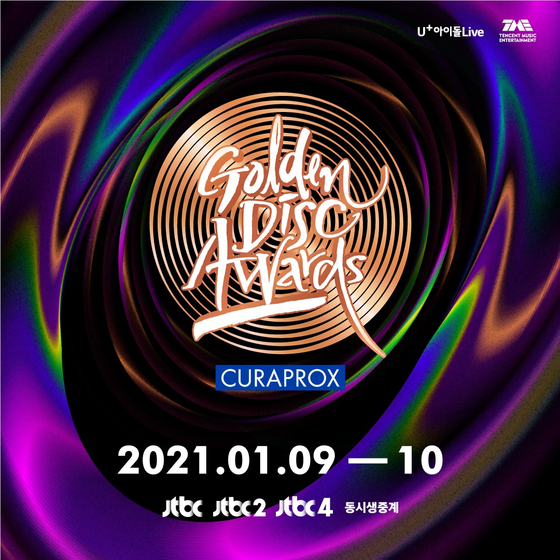 The poster image for the 35th Golden Disc Awards set to take place on Jan. 9 and 10 on JTBC [GOLDEN DISC AWARDS]


Top K-pop stars including BTS, GOT7, NCT 127 and more will take part in and perform at the 35th Golden Disc Awards, set to take place on Jan. 9 and 10, the awards organizers said on Tuesday.

According to organizers, bands participating in the awards ceremony will take to the stage in alphabetical order: Boy bands BTS, GOT7, Monsta X, NCT 127, NU'EST, Seventeen and Stray Kids and girl groups Oh My Girl and Twice.

"The 35th Golden Disc Awards will be held in a non-contact method without any audience," organizers said. "All bands that have finalized their appearance will comply with the safety measures and have their performances pre-recorded. This decision was made to protect the artists."

The Golden Disc Awards began in 1986 and has been esteemed as one of the biggest music awards ceremonies in Korea.

The 35th ceremony will be aired on channels JTBC, JTBC2 and JTBC4.

The first day, Jan. 9, will be emceed by actors Park So-dam and Lee Seung-gi and award digital songs.

The second day will be emceed by actor Lee Da-hee and singer Sung Si-kyung for albums.