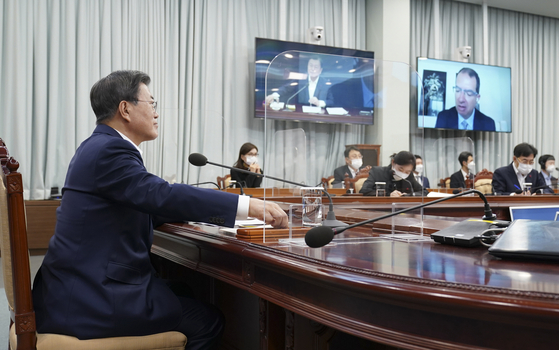 President Moon Jae-in, left, participates in a videoconference with Moderna CEO Stéphane Bancel on Monday at the Blue House. [YONHAP]


After widespread criticism for having botched the procurement of coronavirus vaccines, President Moon Jae-in took matters into his own hands and struck a deal with a U.S. biotechnology firm to purchase doses for 20 million people.

“Moon had a videoconference with Moderna’s CEO Stéphane Bancel from 9:53 p.m. till 10:20 p.m. on Monday,” Kang Min-seok, presidential spokesman, said Tuesday. “During the 27-minute talk, Bancel agreed to supply 40 million doses of the vaccines, enough for 20 million people.”

The amount is double the initial purchase volume the Korean government was negotiating with the company. The government said Monday it would source Moderna vaccines for 10 million people.

If the contract with Moderna as described by the Blue House goes through, Korea will have ordered vaccines for its entire population. 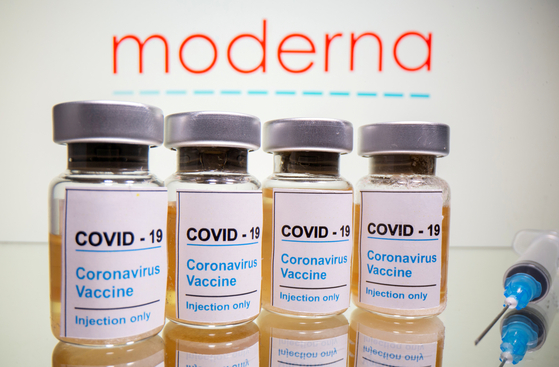 The Blue House said Moon also managed to bargain about the price, but did not disclose details. In August, Moderna said each dose will be priced between $32 and $37, and each course required two shots within 28 days.

Moon praised Moderna’s accomplishments in developing and producing vaccines and receiving emergency use authorization from the Food and Drug Administration in the United States, Kang said.

Kang quoted Bancel as telling Moon that the company will do its best to supply the vaccines early. “Bancel told Moon that if the Korean government wants an early contract, it can be signed before the end of this year,” Kang said, adding that it is the government’s goal to do so.

Before Tuesday, Korea had made deals with international companies to buy enough Covid-19 vaccines for 36 million people.

It signed contracts on Dec. 23 with Janssen to purchase doses for six million people and with Pfizer for 10 million.

If the deal with Moderna for 20 million people is finalized, Korea will have lined up vaccines for 56 million people. According to Statistics Korea, the country’s population in 2020 was 51.78 million.

According to a Bloomberg report on Dec. 22, 32 out of 37 members of the Organisation for Economic Co-operation and Development had secured vaccines to cover their populations. At that time, Korea had enough for 70.8 percent.

Moon and Bancel also agreed to cooperate on a plan in which Korean companies will domestically produce Moderna's Covid-19 vaccines. 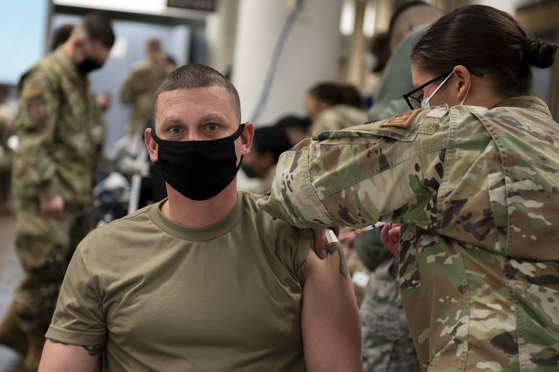 
Moon’s deal with Bancel took place as the president was facing growing public disgust with the government’s vaccine procurement plans amid a third wave of the pandemic. His approval rating plummeted in the latest poll to 36.7 percent, the lowest since he took office in May 2017.

Opposition politicians, experts and domestic media have been lambasting the government for dropping the ball on vaccines. The main opposition People Power Party demanded Tuesday that a National Assembly hearing be held to question government officials about a vaccination schedule.

In a poll released by Realmeter on Dec. 23, 54.9 percent of Korean respondents said they considered speed as the highest priority for Covid-19 vaccinations, while 41.1 percent said their top priority was safety.

Moon has been trying to defend his government. “There are concerns that Korea has not secured enough vaccines or vaccination will be too late," Moon said during a senior secretariat meeting on Monday. “That is not true.”