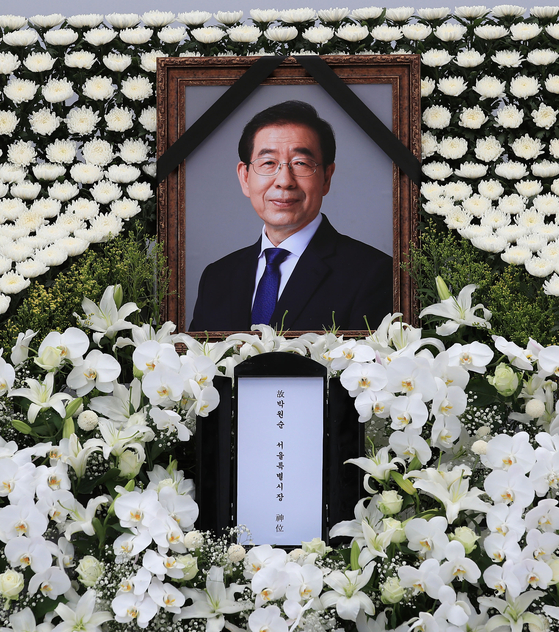 Portrait photo of late Seoul Mayor Park Won-soon at an altar set up in front of Seoul City Hall in July. [YONHAP]

Former Mayor Park committed suicide in July. He went missing on July 9, a day after his former secretary filed a complaint with the police, accusing Park of sexually harassed her for a more than four-year period. He was found dead the next morning near a trail on Mount Bugak in Seoul.

Shortly afterward, police said they will close their case on the sexual harassment allegations without any recommendation to prosecutors, citing the death of the suspect.

However, police continued to investigate whether some of Park’s aides may have abetted the alleged harassment.

The former secretary’s lawyer told reporters in late July that the former secretary had mentioned the case to 20 people at the city government, showing them the lurid text messages and photos of Park in his underwear that he has sent to her via Telegram, an encrypted chatting app. But none of them tried to help her, the lawyer alleged.

“A total of seven of Park’s aides, including the deputy mayor of Seoul and current and former chiefs of staff to the mayor, were accused of abetting the alleged sexual harassment by Park,” police announced Tuesday. “We have questioned the suspects [...] The investigations did not yield evidence to support any charges for the suspects.”

Police declined to disclose their findings regarding whether Park’s suicide was tied to the sexual harassment allegations.

“After the on-site inspections, questioning of witnesses, investigations of telecommunication records and data as well as forensic investigations into [Park’s] phone, authorities could not find evidence of a crime regarding Park's death,” the police announced Tuesday.

"Out of respect for [Park] and his family, we have decided not to disclose the reason why he committed suicide.”

One of the key questions in the investigation was whether Park had found out about his former secretary’s allegations prior to his suicide, and how he could have found out.

“In concluding the investigations, the police have filed a report to the prosecution with the recommendation to indict five people for leaking information about the former secretary’s complaint alleging Park’s sexual harassment,” the police said.

They also recommended the prosecution indict another 10 people for defamation. Police accused those suspects of posting information about and photos of the former secretary online.

For most of the six months since Park’s death, police didn’t have access to any of Park’s three phones, which they considered key to the investigation.

The police were granted a search warrant for one of the former mayor’s phones, a 2018 iPhone XS, in July, but the scope was limited to phone data that could reveal information about his death, not the sexual harassment allegations.

Requests by the police to search Park’s phones for evidence that Park’s aides abetting the alleged sexual harassment were dismissed by the court.