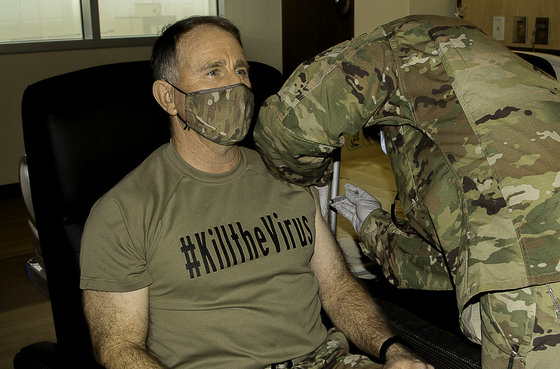 Gen. Robert Abrams, commander of the United States Forces Korea (USFK), receives a Covid-19 vaccine developed by Moderna on Tuesday at the Brian D. Allgood Army Community Hospital in Camp Humphreys in Pyeongtaek, Gyeonggi. The USFK announced that the first round of inoculations will be offered to its medical health professionals and first responders. [NEWS1]

Of 1,046 new cases detected nationwide, more than half were in Seoul, the Korea Disease Control and Prevention Agency (KDCA) said Tuesday morning. At least 233 patients were specifically traced to the Seoul Dongbu Detention Center in Songpa District, southern Seoul, where a cluster has been growing over the past several weeks.

The prison cluster now has 762 Covid-19 patients in all, including 720 inmates and 21 workers, making it Korea’s third-largest cluster. More than one-third of all inmates at the detention center have been infected so far.

As daily coronavirus cases are soaring, so are fatalities, the KDCA warned in a Tuesday briefing. Health officials explained that the virus was penetrating many nursing homes and hospitals for the elderly, where old patients with underlying conditions live.

From Dec. 19 through Monday, 200 Covid-19 patients have died, about a quarter of the total number of fatalities Korea has counted since the pandemic began. Among the latest deaths was the first inmate at the Seoul Dongbu Detention Center to succumb to the virus.

The Ministry of Justice told reporters Tuesday that an inmate who was transferred to a so-called life treatment center for Covid-19 patients with mild or no symptoms last week died Sunday morning. The ministry said the patient received hemodialysis treatment prior to being diagnosed with the virus, and that the KDCA was investigating the precise cause of death.

With cases exploding at the Seoul detention center and the Justice Ministry facing accusations it caused the spread, Prime Minister Chung Sye-kyun released a public apology Tuesday, saying he was sorry that a large-scale cluster emerged from an institute directly managed by the government.

Justice Minister Choo Mi-ae did not apologize but visited the Seoul Dongbu Detention Center on Tuesday at 2 p.m., where she urged officials there to try to curb the spread.

Park Yoo-mi, head of public health at the Seoul Metropolitan Government, said during an online briefing Tuesday that it appears the detention center’s poor ventilation system and confined environment were the major causes of the transmissions. 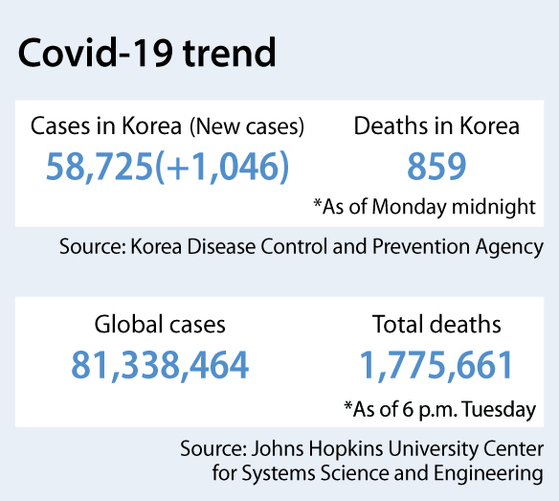 The fact that the facility lacked sufficient space to immediately isolate inmates who contracted the virus also contributed to the rapid spread, she said.

The Justice Ministry, for its part, denied accusations it failed to test every inmate in the facility as soon as a worker first tested positive late last month, blaming the Seoul Metropolitan Government for refusing its request to do so.

An official at the Justice Ministry who spoke on the condition of anonymity said the ministry “strongly suggested” that all inmates be tested in the early stages of the outbreak. But the official said the Seoul Metropolitan Government and the Songpa District Office brushed off the suggestion, saying it would be better to “decide after seeing how things unfold.”

An official at the Seoul Metropolitan Government said the Justice Ministry’s account was “baffling” and false.

“The Justice Ministry never strongly appealed for the need to test everyone in the facility, and even if it did, [the Seoul Metropolitan Government] wouldn’t have refused,” the Seoul official said.

Asked why Seoul health officials didn’t test everyone in the facility after the first inmate tested positive on Dec. 14, the Seoul official explained that epidemiologists had recommended contact tracing of the inmate first.

All workers and inmates at the detention center have been tested three times so far since Dec. 18. The incubation period of the virus can take up to two weeks.

The Seoul detention center was just one of several clusters that added new cases Monday. Cases were also traced to churches, hospitals and nursing homes, among others.

Among the 1,046 people who tested positive for the virus Monday, 1,030 were due to domestic transmissions.

The remaining 16 patients were infected abroad, the KDCA said — three each in the United States and India, two each in Myanmar and Lithuania, and one each in Uzbekistan, Russia, Syria, the United Arab Emirates and Germany and the Philippines.

A record 40 patients died, raising total deaths to 859, while 1,435 patients recovered, bringing total recoveries to 40,703. As of Monday at midnight, Korea had counted 58,725 coronavirus patients in all.

As for the Korean family of three from London who were infected with a highly transmissible coronavirus variant now sweeping through Britain, local health officials Tuesday said that all 17 people they had contact with on the plane tested negative.

Kwon Jun-wook, second vice chief of the KDCA’s Central Disease Control Headquarters, said the family had contact with 12 flight attendants and five passengers on their flight from London to Korea last week. None tested positive, but Kwon said all have been placed under self-quarantine for two weeks in case they develop symptoms.

Health officials downplayed any chance that the family spread the virus locally. They were placed under quarantine at an isolated location from the day they got off the plane at Incheon International Airport on Dec. 22, said officials.

The family flew directly from London’s Heathrow Airport to Incheon International Airport, one day before the Korean government banned all flights from the London airport to Korea due to the exploding number of coronavirus cases in Britain.

The new variant was first spotted in September in southeastern England, and British health officials have warned that the variant could be up to 70 percent more contagious than other variants of the coronavirus. The variant has also been detected in countries outside Britain, mostly in Europe but including some in Asia as well, namely Japan and Singapore.