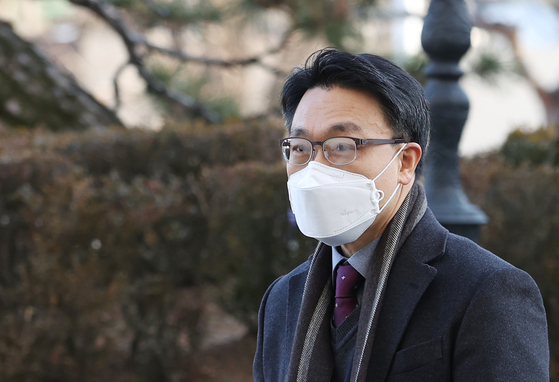 Kim Jin-wook, a former judge and a researcher at the Constitutional Court, enters the court on Wednesday. President Moon Jae-in on Wednesday nominated Kim as the first head of the Corruption Investigation Office for High-ranking Officials. [YONHAP]

“Of the two candidates recommended by the nomination committee on Monday, Moon nominated Kim, a researcher at the Constitutional Court, as the head of the Corruption Investigation Office for High-ranking Officials [CIO],” said presidential spokesman Kang Min-seok. “Kim will go through the National Assembly’s confirmation hearing before the appointment.”

Political neutrality and professional ability were the key factors in Moon’s decision, Kang said. “We request the National Assembly’s cooperation to operate the confirmation process smoothly in order to launch the CIO as soon as possible."

The appointment does not require the legislature’s approval. The ruling party and the government said they want the CIO to start operating in January.

The head of the new agency will serve a three-year term.

The nomination panel on Monday voted to select Kim and Lee Kun-ree, both recommended by the Korean Bar Association, as candidates to head the CIO. Moon selected Kim over Lee, a former prosecutor currently serving as the vice chairman of the state-run Anti-Corruption and Civil Rights Commission.

A native of Daegu, Kim, 54, earned his bachelor’s degree from Seoul National University, majoring in archaeology and art history. He received his master’s degree in law and then studied at Harvard Law School.

Since 2010, Kim has served as a researcher at the Constitutional Court. He served in multiple key posts in the court, including chief of staff for the chief justice.

The former judge also has experience as an investigator. In 1999, he was a special investigator in an independent counsel probe into allegations that prosecutors had instigated a strike at state-run Korea Minting, Security Printing and ID Card Operating in 1998. The Kim Dae-jung administration was suspected of having instigated the strike and then brutally cracked down on it in order to set an example to other public companies, but the probe found no grounds to substantiate the accusation.

The main opposition People Power Party (PPP) was critical of both candidates. Two nomination panel members appointed by the PPP boycotted the nomination process on Monday, in which Kim and Lee were selected out of eight contenders.

Rep. Joo Ho-young, floor leader of the PPP, called Kim an ally of the Moon administration on Wednesday, expressing skepticism of his political independence.

“He had once applied for a senior post in this administration but failed,” Joo said. “It is possible that the CIO will take over the prosecution’s probes into the administration’s suspected abuses of powers and bury them.”

Kim had applied to be the head the Justice Ministry’s Human Rights Bureau shortly after Moon took office, but the job went to Hwang Hee-seok.

It is also the first state agency to be granted the authority to indict suspects, a power that until now has been solely held by the prosecution. The agency has the power to indict some top officials as well as prosecutors, precluding the prosecution from shielding its own members from criminal charges.