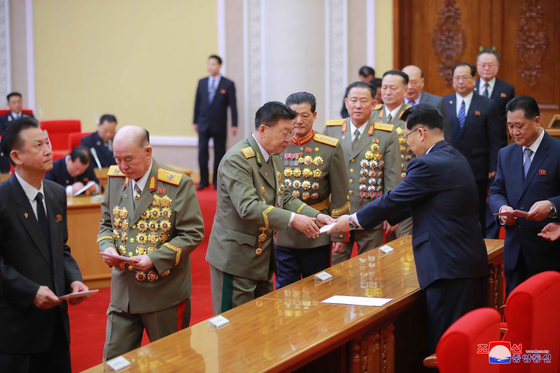 Delegates of the North's ruling Workers' Party receive certifications for their participation in the upcoming eighth Party Congress to be held early next month, as shown in a state media photograph. Representatives from across the country have already gathered in Pyongyang for the event. [YONHAP]

The delegates, recently selected by party organizations at all levels across the country, received a “warm welcome” from citizens of the capital as they arrived, said the official Korean Central News Agency (KCNA).

All delegates were given certifications by party Vice Chairman Kim Jae-ryong Wednesday for participation in the congress, reported KCNA, which added the upcoming event “will set forth the line of struggle, strategic and tactical policies to surely put the cause of building a socialist power onto the next stage of victory.”

The assembly of national representatives follows confirmation by the regime’s Politburo Wednesday that the congress would be held in early January, between New Year’s Day and presumably Jan. 8, which is North Korean leader Kim Jong-un’s birthday.

Given that delegates usually gather a day or two before national events, the congress could kick off as early as Jan. 1, inaugurated by an annual New Year’s address by Kim Jong-un.

The dictator’s speech for the new year is always one of the most closely watched public addresses in North Korea and often contains important messages about the regime’s domestic and foreign policies for the year.

2021 holds particular significance for Kim, as the year marks a decade since his rise to power in December 2011 following the death of his father, former leader Kim Jong-il.

By his own admission in a letter to South Korean President Moon Jae-in in September, Kim Jong-un called 2020 a “terrible” year.

Such a statement appears honest. Hit by a trifecta of disasters in Covid-19, typhoons and continuing international sanctions, the regime is muddling through its worst economic crisis since the late 1990s, when a famine is believed to have killed hundreds of thousands at the least.

Kim hopes to turn the regime’s fortunes around with a new economic plan to be unveiled at the eighth Party Congress.

But whether a political event can achieve such a goal next year remains uncertain, as does the country's Covid-19 situation. According to the People’s Vaccine, an analysis conducted by the charity confederation Oxfam, North Korea is among 67 low-income countries that will largely be unable to receive inoculations for Covid-19 next year.

With rich countries accounting for only 14 percent of the global population buying up 53 percent of vaccines produced, only around 10 percent of those living in poorer countries may be vaccinated in 2021.

Though Pyongyang insists it has had no Covid-19 cases on its soil, it continues to impose intense restrictions on cross-border activities in addition to heightened social distancing rules domestically, all of which has had a severe impact on economic activities in the country.