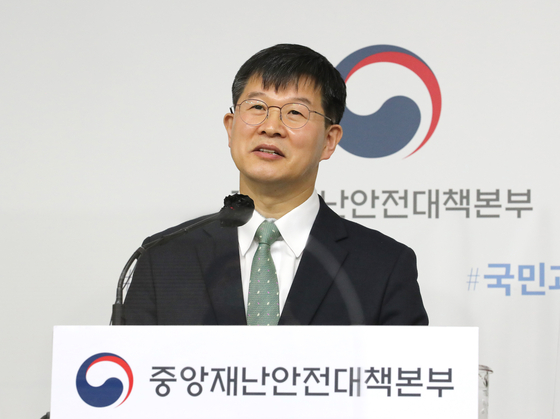 Lee Gi-il, the public health policies director of the Health and Welfare Ministry, holds a media briefing on Thursday at the government complex in Sejong. [YONHAP]


The government will offer an additional skills test in January to senior medical students who boycotted the licensing exam in September to protest the administration's proposed medical workforce reforms, in order to keep up with the number of medical professionals in the battle against Covid-19.

The Ministry of Health and Welfare announced Thursday that there will be two skills tests held next year, one in the first half and another in the second. The first skills test will take place in late January, the ministry said.

“We made the decision because it is important to prevent a shortage of doctors, in order to implement and improve public health services without disruption, secure enough doctors in critical fields and prevent a medical service vacuum in rural areas,” Lee Gi-il, director of the health care policies office of the ministry, said during a media briefing.

“About 2,700 students boycotted the skills test in September,” Lee said. “Therefore, we will be short by 2,700 new doctors next year, and that will also lead to a shortage of 380 public health doctors. Because public health doctors serve in public medical institutions and remote areas, people’s lives and safety are at stake unless this problem is resolved [...] The government gave [the issue] serious consideration and decided to offer them an opportunity next year.”

Public health doctors are medical professionals who serve in state institutions for three years instead of enlisting for required military duty. They are normally assigned to facilities in remote rural and island areas.

Thousands of doctors across the nation, as well as medical students, went on strike last summer to protest the government’s proposed medical reforms, which included a 4,000-student increase in medical school admissions over the next decade, opening a public medical school and expanding remote medical services.

The walkout didn’t cause any serious mayhem to efforts to treat Covid-19 patients, and after two weeks the Korean Medical Association, which led the protests, struck an agreement with the ministry to suspend the reform effort until the pandemic subsides.

Yet medical students continued their protests, and only 423 out of 3,172 eligible students took the test, of whom 365 ultimately passed. Although the students later said they were willing to take the exam, the government refused to offer an additional opportunity.

Lee said the government is well aware of the public opinion that collective action threatening people’s lives and safety must not be tolerated, but had to make a difficult decision because it is the country’s top priority to safeguard the public health and safety of patients.

“Emergency patients and residents of rural areas must not be left uncared for, and it is the government's responsibility and duty to save lives during the pandemic,” Lee said.