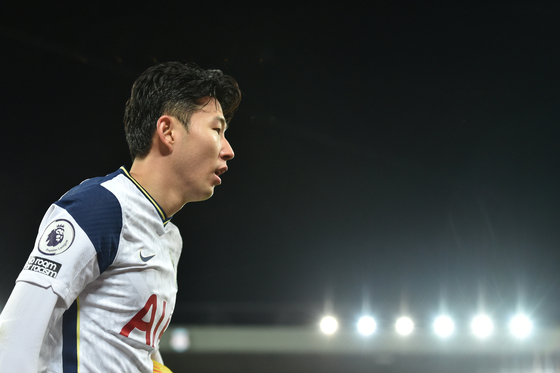 
Tottenham Hotspur's final game of the year — and Son Heung-min's last shot at a Spurs century in 2020 — was postponed Wednesday after a Covid-19 outbreak at the opposing team.

Spurs were due to face Fulham on Wednesday night, or early in the morning on Thursday in Korea, but the game was postponed indefinitely after a "number of players" showed symptoms at Fulham, according to a statement from the English Premier League (EPL).


"The Premier League informed us of the decision this afternoon, with Fulham having requested the postponement on the grounds of the number of Covid-19 positive cases among their players and staff," Spurs said in a statement. "Everyone at Tottenham Hotspur sends their best wishes to Fulham for a safe and speedy recovery to all those who are affected."


The postponement ends Spurs 2020 in a bit of a skid in the EPL. Despite rising to No. 1 in the league only a few weeks ago after a red hot start to the season, the London side has started to struggle in the last couple of weeks, with their last Premier League win on Dec. 7.

Over their last four EPL games, Spurs, who have now slipped to seventh place, drew with Crystal Palace on Dec. 13 and then lost to Liverpool on Dec. 16 and to Leicester City on Dec. 20. Their last game, against Wolverhampton Wanderers on Dec. 28, also ended in a draw.

Son has continued his strong form through December, scoring three goals for the month but missing out on the chance to score his 100th goal in a Tottenham Hotspur shirt. Son's only goal since Dec. 7 came in the loss to Liverpool on Dec. 16, taking him to 99 career goals scored for Spurs across all competitions.

Spurs' recent performance has also slowed down the Harry Kane and Son goal-making partnership. Although the duo are set to become the most prolific goalscoring combination in Premier League history, as well as breaking the record for the most goals scored by a partnership in a single season, that achievement will also have to wait for next year.

Spurs' first few fixtures of the new year should go in their favor, at least on paper. The London side will take on No. 11 Leeds United on Jan. 2 in the EPL, before facing second-tier club Brentford F.C. on Jan. 5 in the Carabao Cup and seventh-tier side Marine A.F.C. on Jan. 10 in the FA Cup.