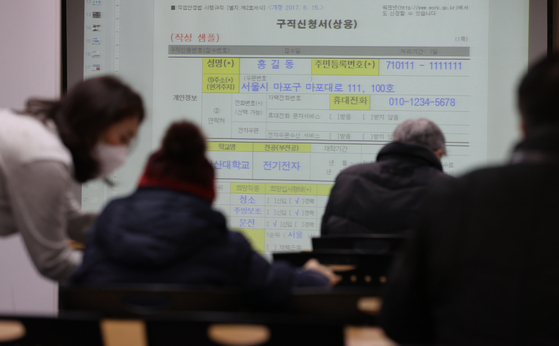 People learn how to write job applications at an employment welfare plus center in Seoul on Dec. 16. [YONHAP]


Hiring will remain weak through the first quarter of this year, according to a report by the Ministry of Employment and Labor.

Korean companies plan to hire about 253,000 employees in the fourth quarter of 2020 and the first quarter of 2021, down 5.1 percent compared to same period the previous year.

It marks the lowest employment figure for any September-to-March period in 11 years, since 2009 when the economy met the global financial crisis.

Small- and mid-sized companies with fewer than 300 employees will recruit some 218,000 new employees during the same period, a 0.5 percent decrease on year.

Amid the pandemic, companies are already reducing the number of new hires.

In the third quarter of 2020, companies with more than five employees recruited a total of 557,000 new employees, a 6.9 percent drop compared to same period a year ago. That’s the lowest number of newly hires of any third quarter since 2013.

The low number of newly employed “in the third quarter was largely due to the strengthened social distancing restrictions amid the resurgence of Covid-19,” said Kwon Ki-seop, head of the employment policy office at the Ministry of Employment and Labor.

As of October, the average monthly salary of a regular worker in Korea was about 3.33 million won ($3,100), up 0.3 percent compared to the previous year.

Meanwhile, the monthly salary for employees in large companies with more than 300 workers was down about 6 percent from a year ago, to 4.69 million won. The Ministry of Employment and Labor said “salary cuts in hard-hit industries such as airline and transportation business” were the biggest reason behind the drop in the monthly salary figure.

“As the daily coronavirus cases have been constantly increasing in December, the slowdown in employment figures is expected to continue further in December,” Kwon added. “Due to the tightened social distancing guidelines, the situation is likely to last at least until the first quarter of 2021.”