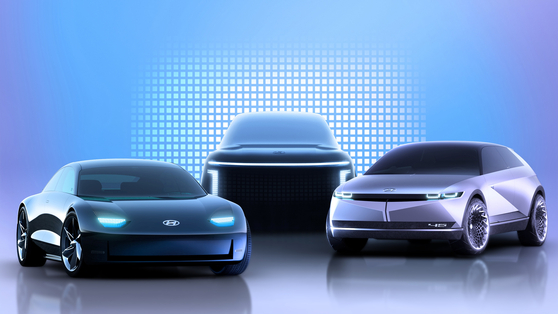 
Electric vehicles (EVs) have been around for a while, but they've always been a minor player on Korean roads.

That trend is expected to change in 2021, as a handful of entirely new EV models are scheduled to arrive here.

“Until now, it was like a warm-up,” said Lee Hang-ku, a senior researcher at the Korea Institute for Industrial Economics and Trade. “The real game begins in 2021 as carmakers competitively release new EVs armed with the latest technology and designs.”

Korea, which has been relatively slow in adopting EVs compared to some countries, has been showing constant growth recently.

Both domestic and foreign carmakers are rushing in with new EV models to carve out a slice of the growing market. 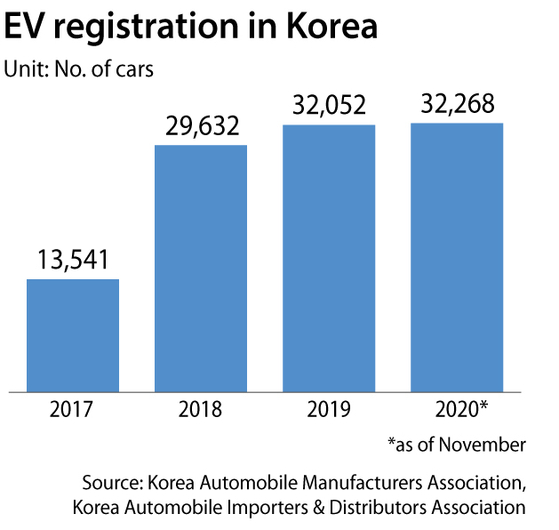 
Hyundai Motor and its affiliates will roll out four new EV models in 2021, three of which will be manufactured on the EV-dedicated platform dubbed E-GMP. EVs manufactured using the E-GMP modular system will include an 800-voltage charging system instead of the more widely used 400-voltage system and are expected to have a driving range of approximately 500 kilometers (310 miles) per charge. It also enables the car to charge up to 80 percent in a little over 15 minutes.

Hyundai Motor will introduce the Ioniq 5, a midsize electric SUV, in the first half. It will be the first model to launch under the carmaker’s EV-dedicated brand Ioniq announced earlier this year.

Currently only a teaser picture has been released, but according to Hyundai Motor research and development chief Albert Biermann at the E-GMP launch event early in December, the vehicle will largely veer away from the typical design language of EVs currently on the market.

Genesis, a luxury label under Hyundai Motor, is also expected to release its first-ever EV model next year along with an electric version of its flagship G80 sedan, dubbed the eG80. The new model currently known by the code name JW is expected to be a small SUV. 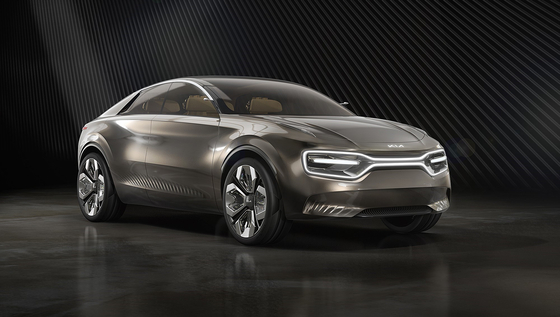 Kia Motors' concept car Imagine by KIA which is expected to be the base of the carmaker's soon-to-launch electric vehicle model known by the code name CV. [KIA MOTORS]


Kia Motors, a smaller affiliate of Hyundai Motor, is also gearing up for a brand new EV known by the code name CV. Also based on the E-GMP, CV, which is expected to be an SUV, will be one of seven all-electric models the carmaker promised to launch by 2027. Kia Motors has revealed its concept car dubbed The Imagine by KIA at the 2019 Geneva Motor Show.

Smaller Korean carmakers are also jumping on the bandwagon too.

SsangYong Motor, which doesn’t have a single EV at the moment, pledged to launch its first, dubbed the E100, next year. Based on SsangYong’s flagship midsize Korando SUV, the E100 is said to have a range of 400 kilometers per charge.

GM Korea is expected to bring its Bolt EUV, a bigger version of its popular all-electric Bolt EV, to Korea in the latter half of 2021, although no detailed timeline has been confirmed. Its U.S. headquarters has said that the model will go into production in the summer.

Imported carmakers are also gearing up for a full-fledged launch of their EV models.

Mercedes-Benz Korea will bring two new EVs here next year: The EQS and the EQA. The exact timeline has not yet been confirmed, but the launch in Korea will presumably take place in the latter half as neither car has had its global launch yet. 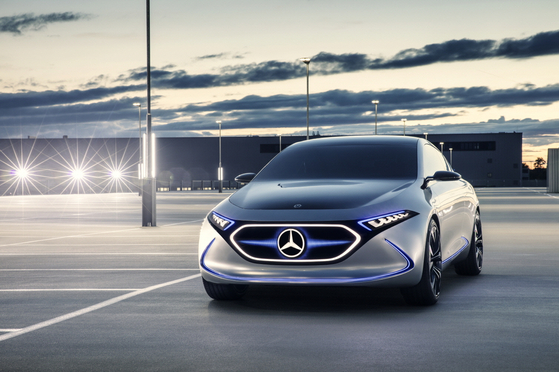 
The EQA, based on the carmaker’s GLA compact SUV model, will have a range of around 400 kilometers. It is scheduled to be unveiled in January.

The EQS, which Korean customers got a sneak peek of earlier this year when Mercedes brought its concept model here, will be one of the few luxury sedan EVs. It is expected to have a range of 700 kilometers per charge.

Mercedes-Benz currently has one all-electric model, the EQC midsize SUV, in Korea. It sold a mediocre 474 units this year as of November due to the high price and relatively low range of 309 kilometers per charge. 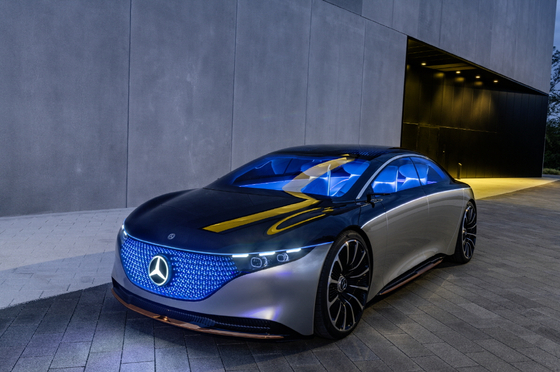 
BMW’s presence in Korea’s EV market hasn’t been as strong as it is in the internal combustion engine one. Although it was one of the first import carmakers to bring its all-electric models — the i3 and the i8 — to Korea, their popularity dwindled with the suspension of i8 production from the Germany headquarters and the relatively short range of the i3, which used to be below 300 kilometers per charge. 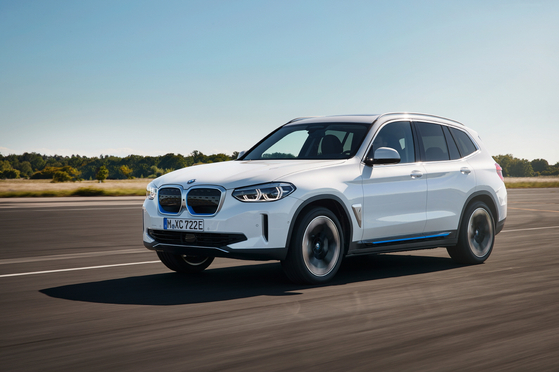 
The Munich-based luxury carmaker hopes to turn the tables in 2021 by bringing two brand new EV models to Korea — the iX3 midsize SUV based on BMW’s flagship midsize X3 SUV and the iX, which will be built on the company’s EV-dedicated platform. Both are expected to launch in Korea in the fourth quarter of 2021. 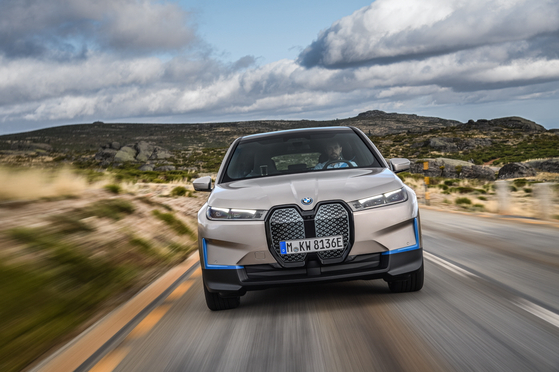 
The iX, which will be a little bigger than the large X5 SUV, can drive more than 600 kilometers per charge based on WLTP standards, according to BMW.

Audi, which launched its first pure EV model e-tron in Korea this year, will bring a coupe version of the SUV under the name e-tron Sportback. 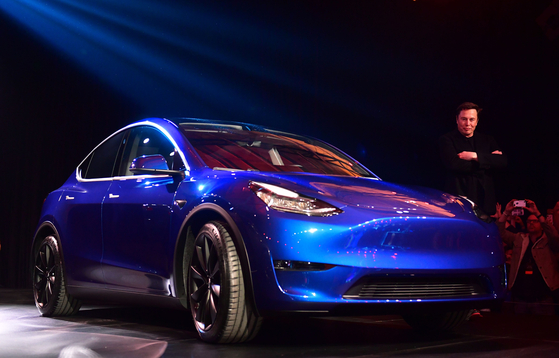 
It will hit the market in the first half with a range of 220 kilometers per charge.

Last but not least, Tesla, which is taking Korea’s EV market by storm with the cost-effective Model 3, is also expected to bring a new model, the Model Y.

The seven-seater SUV type will be able to drive 505 kilometers per charge. The exact timeline of its Korean launch has not yet been confirmed.

Tesla's Model 3 is currently the most popular EV in Korea this year, selling 10,866 units as of November. Hyundai Motor's Kona EV sold 7,888 units during the same period.