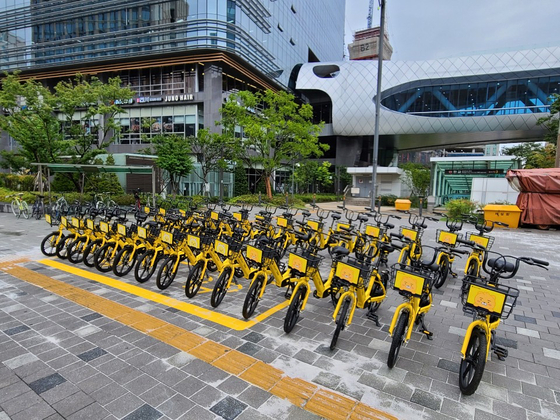 Kakao T bikes are parked in front of the Pangyo Station in Seongnam, Gyeonggi. [KAKAO MOBILITY]


The era of public bike sharing appears to be coming to an end after failing to achieve cost efficiency, and corporations are taking their place with mobility businesses that are based on subscription models.

Ansan, Gyeonggi, has decided to shutter its public bike-sharing service Pedalro at the end of next year, according to industry sources. Ansan introduced the service in 2013, and 1,553 bikes are currently in operation. An Ansan City document that the JoongAng Ilbo acquired stated that the business closed mainly due to the inefficient operation.

“The operation of Pedalro costs a lot due to the stations, and the methods for rental and return are inconvenient,” the report stated.

The city’s alternative solution was private bike sharing. Ansan stated in the report that there will be 1,000 Kakao T bikes in the city this year, 500 more than during a trial run last September, in order to increase transportation accessibility.

Goyang in Gyeonggi is also closing its public bicycle rental system, Fifteen, in May 2021, after operating since 2010. Bike-sharing service Tazo, which is operated by KT and Omni System, will take its place in February. Omni System is a power meter manufacturer in Yeouido, western Seoul. Suwon implemented Tazo in September.

“Goyang decided to shutter its public bike-sharing system because a private service is more cost effective,” a spokesperson for the city's road policy division said.

According to the Ministry of the Interior and Safety, there were 49,633 public bicycles in the country, run by 69 local governments, as of the end of 2019. In 2019, 30.31 million bikes were rented. In 2018, the rate of satisfaction for Ttareungyi was 93.9 percent, according to a survey of Seoul’s public sharing policies.

But the high satisfaction rate of the public sharing policies was offset by its low profitability, exacerbating the financial burdens of the local governments. Although consumer prices are low, the fees for establishing and maintaining the systems are high, mainly due to the costs of the stations. Seoul’s Ttareungyi ran up a deficit of 8.41 billion won ($7.7 million) in 2019, which bled into this year, recording a further loss of 5.36 billion won as of November. Ansan’s Pedalro recorded about 500 million won in annual sales, but the maintenance fee costs around 1.9 billion won annually.

Private companies are expected to capitalize on the ineffective operation of public bike-sharing services, with Kakao Mobility in the lead. Kakao released the Kakao T Bike in March, a service through which users can rent and return the bikes on the Kakao T app. Kakao’s taxi and chauffeur services are all on the same app. Around 6,000 bikes are run by eight local governments nationwide, including Songpa District in southern Seoul and Seongnam in Gyeonggi.

Car-sharing company Socar’s subsidiary bike-sharing app Elecle has a fleet of 2,000 bikes spanning seven regions, including Seoul and Sejong. The private companies offer services that allow users to park at any location, a feature that offers more convenience than the public bike-sharing services with fixed stations.

“The bike-sharing business costs billions of won every year, so it is not sustainable for local governments to sustain the services,” said Shin Hee-chul, a researcher at the Korea Transportation Institute. “The role of private businesses will expand because their strength lies in organizing customer-friendly services.”

“Cost efficiency cannot be the only consideration,” said a spokesperson for the bike policy division of Seoul City. “We are planning to increase the number of Ttareungyi bikes in the city from the current 30,000 to 40,000 in 2021.”

Transportation experts say that the privatization of bike-sharing services will likely continue. And competition is intense for acquiring mobility data for bikes, as the mobility history leading up to the user’s final destination can be used toward services catered to the specific user’s itinerary.

“When the public bicycles of major cities are acquired by the private sector and the burdens are lifted through the subscription model, it will be a major opportunity for the mobility market,” said Lee Seung-gun, the head of business development at Elecle.