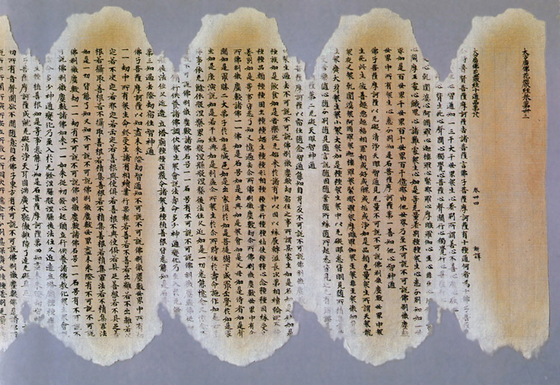 Along with the Lotus Sutra, this principal scripture of the Avatamsaka Sutra is one of the books that had the greatest influence on the establishment of Korean Buddhist philosophy.

This book is the oldest copy of the scripture in Korea that is decorated with handwritten content and magnificent paintings.

It is made in the form of a scroll that measures 1,390.6 centimeters long and 29 centimeters wide.

The account of publication reveals that a Buddhist monk named Yeongi started working on the print in 754, the 13th year of the reign of King Gyeongdeok of the Silla Dynasty (57 B.C. to A.D. 935), and completed it the following year.

The account contains detailed information on the 19 people who participated in the process of publication and describes the method of production as well as ceremonial procedures.

This implies that the production of a print was preceded as a means of testifying one's religious faith since as early as the Silla Dynasty.

Another peculiar feature of this book is that the sentences are written in idu, a unique way of expression using Chinese characters seen during the Silla Dynasty.

A summary painting colored in gold is found at the beginning of the book.

What appears to be the cover is decorated with a painting of heavenly guards, Buddhist saints, flowers and plants.

The painting was originally made in one piece, but it is now broken into two.

Nonetheless, it is the only remaining piece of work from the Silla period and an important material for the study of paintings during that period.

It is likely that this book was published by Yeongibeopsa, the founder of Haeinsa Temple, and kept inside a stone pagoda in the temple where his mementos were stored.

This is the only literature from the Silla Dynasty that helps us to understand the philosophy of Avatamsaka Buddhism.

It is also a valuable material for studying Buddhism as well as the bibliography and arts of the Silla period.