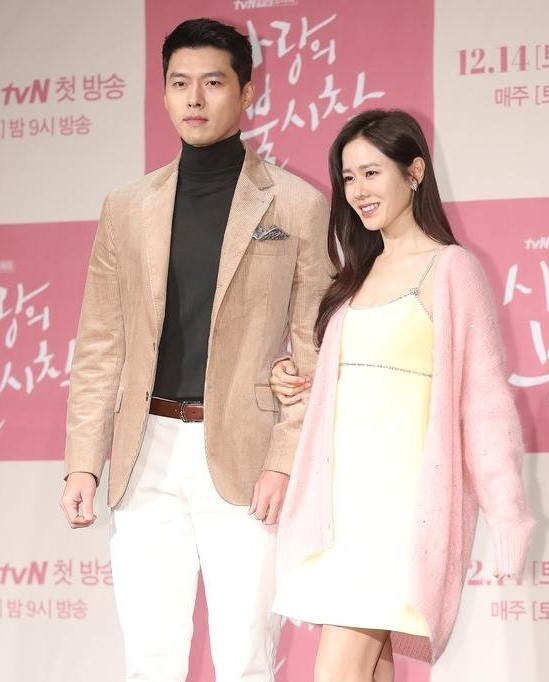 Actors Hyun Bin, left, and Son Ye-jin at the press preview for the TV series ″Crash Landing on You″ on Dec. 9, 2019. They acknowledged on Friday that they have been dating for eight months. [ILGAN SPORTS]


The fictional lovers of the hit TV series "Crash Landing On You"(2019-20) have become lovers in real life. Actors Son Ye-jin and Hyun Bin, two of the leading stars of the Korean wave, acknowledged that they have been dating for eight months.

After the announcements from the agencies, Son wrote on her Instagram account, “I’m grateful that I could meet such a good person. I will make efforts to nurture [the relationship] well and beautifully.”

Son and Hyun Bin, both 38 years old, had repeatedly denied dating rumors which first began after they co-starred in the crime thriller film “The Negotiation” in 2018. The rumors intensified when they played the roles of a South Korean chaebol heiress and an elite North Korean officer who fall in love in the romantic comedy "Crash Landing On You," aired on cable channel tvN.

The agencies for the two actors emphasized that their relationship began in March, a month after the conclusion of the TV series.

Both Son and Hyun Bin earned early fame for their roles in romance dramas before moving into genres such as history and thriller.

Son emerged as the “icon of first love” thanks to the romance films "Lover's Concerto" (2002) and "The Classic" (2003). Then, she obtained critical acclaim for more diverse roles such as the leading roles in thriller film "The Truth Beneath” (2015) and in the historical drama film "The Last Princess" (2016). Unlike on the big screen, on TV, she has remained as the queen of melodramas and rom-coms, starring in "Something in the Rain" (2018) and "Crash Landing on You."