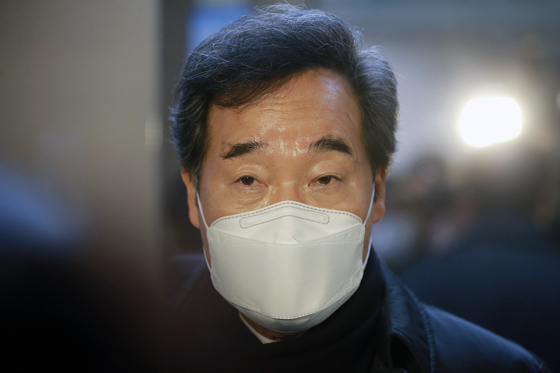 “We will be taking the time to listen to the opinions of the rest of the members of the DP and the public on the matter,” Choi In-ho, chief spokesman for the DP, told a group of reporters following the meeting on Sunday.

Former presidents Lee and Park were investigated and indicted after President Moon launched a campaign to “eradicate accumulated evils.”

The Supreme Court convicted Lee of embezzlement and taking bribes from a conglomerate and sentenced him to 17 years in prison in October. Park, who was impeached in 2016 and ultimately removed from office, was convicted of corruption and abuse of power, and most recently was sentenced to 20 years in prison. That sentence has been appealed by the prosecution. The final ruling will be made at a trial scheduled at the Supreme Court on Jan. 14.

Lee’s suggestion has been received with mixed responses, with some members of the ruling DP opposed to the idea.

“The two [former presidents] have not offered their apologies [regarding the charges], and in Park’s case, the trial isn’t over yet,” wrote DP Rep. Woo Sang-ho on his Facebook account on Friday. “I am afraid the talk about giving presidential pardons at this point may lead to further division of the nation.”

In a call with the JoongAng Ilbo on Sunday, a member of the DP Supreme Council, Kim Jong-min, said that there must be “plenty of discussions between opposition and ruling parties on the topic” especially since former President Park’s power abuse scandal has had tens of thousands of people on the streets in rallies for months from 2016 to 2017, demanding her resignation.

Some members of the main opposition People Power Party (PPP) appeared wary initially but warmed up to the idea over the weekend.

“Regardless of what Chairman Lee may be intending [politically] with the suggestion, I would like to welcome it for the sake of the democracy of Korea,” Park Hyung-jun, a former lawmaker of the PPP, wrote on his Facebook account Saturday. “Presidential pardons will help the politically divided nation find ways to come together.”

Former PPP lawmaker Yoo Seung-min and PPP member and Jeju Governor Won Hee-ryong have also vouched their support for presidential pardons on their social media accounts as of Saturday.

But some former members of the judiciary thought the discussion on pardons was coming too early.

“The Supreme Court has yet to make its final ruling on former President Park,” said Lee Chung-sang, former chief justice of Seoul Central District Court and professor of law at Kyungpook National University in Daegu. “Causing political sensation around the verdict before the Supreme Court makes a decision is, in other words, slighting the authority of the court.”

The Blue House has not made any official comment on the matter.

“There should be a public consensus first on granting presidential pardons,” a senior-ranking official of the Blue House told the JoongAng Ilbo over the weekend. “If there is such a consensus, then it wouldn’t be a bad idea to put forward the agenda to the president.”