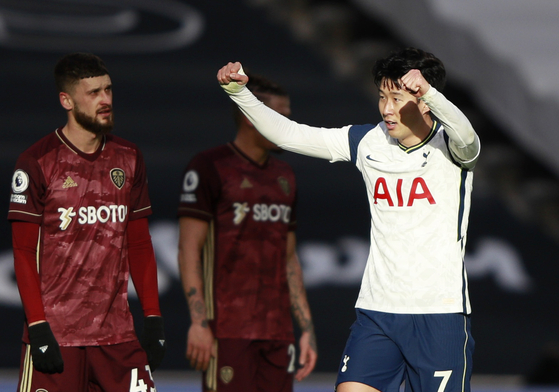 
Son Heung-min has started 2021 with a bang, scoring his 100th goal in a Tottenham Hotspur shirt on Saturday and tying the record for the greatest single-season goalscoring partnership in English Premier League (EPL) history.

Spurs picked up a much-needed 3-0 win over Leeds United at Tottenham Hotspur Stadium on Saturday, kicking off the new year with their first Premier League win in five games.

It was Harry Kane who got things started with a penalty in the 29th minute. Kane, who celebrated the birth of his third child just days earlier, slotted the ball home for his 205th goal for Spurs.

Son's chance came in the dying minutes of the first half. Once again it was a Kane-Son matchup, with Kane crossing the ball into the box in the 43rd minute for Son to punch past the goalkeeper for his 100th club goal.

The third goal came just a few minutes later, with a header from Toby Alderweireld in the 50th minute, converting a Son corner to take the score to 3-0.

Saturday's win sees Spurs climb back to the No. 3 spot in the EPL. Despite rising to No. 1 in the league only a few weeks ago after a red hot start to the season, the London side started to struggle in the last couple of weeks of 2020, with their last Premier League win before Saturday on Dec. 7.

Son's Spurs century was his 12th EPL goal of the season, already passing last season's 11 goals and tying his 2017-18 and 2018-19 season records. Son's personal best is 14 goals in the 2016-17 season, an achievement he is almost certain to beat with five months still remaining of this season. 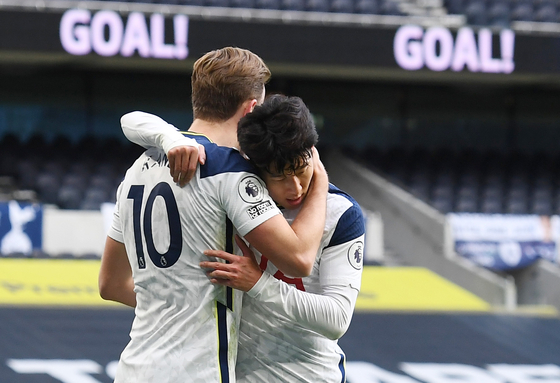 
Son and Kane walk away from the Leeds game with a goal and an assist each, indicating that after a few quiet games, Spurs' goalscoring duo are back in control.

In fact, by teaming up on Son's goal, the pair have now tied the record for the most prolific goalscoring partnership in a single EPL season ever, tying the record sit by England football legend Alan Shearer and Chris Sutton, who together produced 13 goals for Blackburn Rovers in the 1994 to 1995 season.

And there should be more action to come.

Spurs' next few fixtures look likely to go in their favor, at least on paper. The London side will take on second-tier club Brentford F.C. on Jan. 5 in the Carabao Cup and seventh-tier side Marine A.F.C. on Jan. 10 in the FA Cup, before returning to the EPL for a game against No. 7 Aston Villa on Jan. 13.