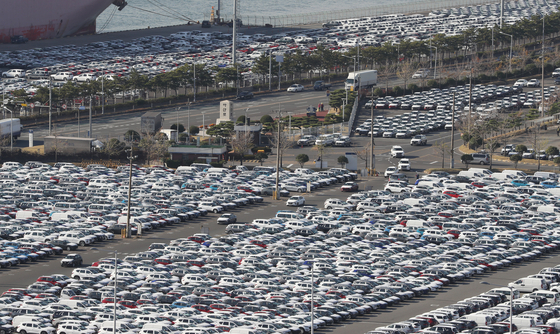 Domestic sales were mostly better than 2019 as the government subsidized car purchases, but exports dropped dramatically.

Hyundai Motor, the biggest carmaker by sales in Korea, sold 3.7 million units last year, 15.4 percent fewer than the previous year. In Korea, it reported a 6.2 percent increase, while in overseas sales, which includes exports and foreign manufactured, it reported a 19.8 percent decrease.

“Covid-19 scared off global demand for cars, leading to general decrease in overseas sales,” the company said in a release Monday.

Hyundai Motor pledged to sell a total of 4.16 million cars this year, 741,500 units of which will be sold in Korea and the rest overseas.

Kia Motors said Monday it will sell a total of 2.92 million units this year, 535,000 units of which will be sold domestically.

Renault Samsung Motors posted a 34.5 percent year-on-year drop last year, selling 177,450 units as the Korean unit of the Renault-Nissan-Mitsubishi Alliance couldn’t find a replacement for its contract production of the Nissan Rogue, which ended in March.

It sold 95,939 units in Korea, which is 10.5 percent more than the previous year, but its exports nosedived by 77.7 percent last year.

It's not the journey, it's the snacks you buy along the way