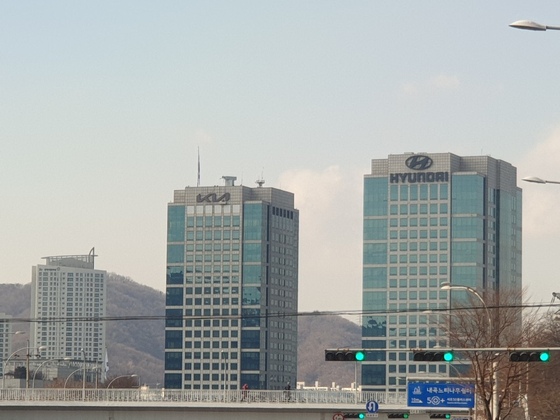 
Kia Motors put up a new sign at its Seoul headquarters over the New Year break, signaling the start of a comprehensive brand renewal as the entire Hyundai Motor Group repositions itself for the future mobility era.

The signage of the Kia Motors headquarters in southern Seoul used to consist of its current emblem, the capitalized KIA in a circle, and the company name, Kia Motors, in red.

Both were removed in mid-December.

A new logo had been installed on the front of the building by Jan. 1, a futuristic stylized Kia logo using a different font from the existing branding, colored blue rather than red. The "Kia Motors" sign has not been replaced.

The sign was covered again on Monday afternoon, suggesting that Kia is not finished with the redesign. 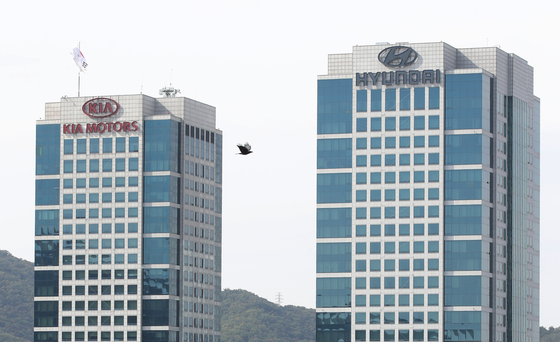 
The No. 2 carmaker in Korea by sales has been constantly pushing its initiative to shift from an internal combustion engine-focused automobile manufacturer to a mobility solution provider with an emphasis on electric powertrains.

As part of that push, Kia Motors is also planning to lose the "Motors" and become just Kia, with a new slogan to match the rebranding.

According to the Korean Intellectual Property Office (KIPO), Kia Motors filed for more than 30 trademarks in December, including the new emblem and a slogan that reads “Movement that inspires.”

Kia's old slogan was “The Power to Surprise.”

The trademark applications to KIPO also included what’s expected to be the names of a new lineup of vehicles under Kia Motors, including the brands EK, EV and IK, all in the same font as the new Kia logo.

Each series name is expected to indicate a different type of car, such as sedans and SUV. The trademark applications also included the presumed series names with different numbers next to them, thought to indicate the size of the vehicle.

The plan included 29 trillion won ($26.8 billion) in investment through 2025, including Kia Motors’ plan to launch 11 battery EVs by 2025 and achieve a 6.6 percent market share in the global EV market by the same year.

The new logo, which was first seen at the 2019 Geneva Motor Show on the Imagine by Kia concept car, is highly likely to appear on a car for the first time on the soon-to-launch K8 midsize sedan, a fully revamped version of the K7, which is expected in the first quarter.

It will also be put on its brand new EV model known by the project name CV, which will be manufactured based on the company's new EV-dedicated E-GMP modular platform and launch this year.

A Kia Motors spokesman said Monday that the detailed plan for the brand renewal will officially be announced later this week.