Small businesses sue gov't for closing them down

Small businesses sue gov't for closing them down 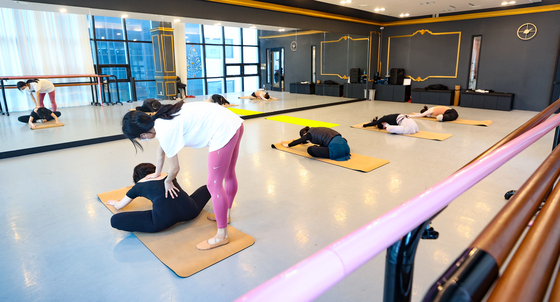 A ballet instructor teaches students Monday after health authorities allowed ballet and taekwondo centers to reopen as long as there are fewer than nine people in the facilities. [YONHAP]

Owners of small businesses forced to shut down during the pandemic are banding together to sue the government for financial losses as extended social distancing measures went into force Monday.

Several lawyers say more than 500 people have joined lawsuits seeking compensation so far, with hundreds more planning to participate. They include owners of hagwon (private cram schools), indoor gyms and Pilates centers, which have faced an ever-evolving array of business restrictions from health authorities over the past several weeks as daily coronavirus cases surge.

The central government last Saturday announced that the greater Seoul area comprising Seoul, Incheon and Gyeonggi will remain subject to Level 2.5 measures — the second-highest level in the five-tier social distancing scheme — for another two weeks from Monday to Jan. 17, while most of the rest of the country will remain subject to Level 2 rules during the same period.

Under Level 2.5 rules enforced in greater Seoul, all indoor fitness centers are forced to close throughout the entire day, while internet cafes have to close at 9 p.m. Hagwon classrooms, taekwondo and ballet schools can only open for in-person learning on the condition there are nine people or fewer in the entire facility, with all classes being held before 9 p.m.

Hagwon classes that specifically cater to students preparing for imminent college entrance exams can be held without the nine-person limit, but must space out their students and close at 9 p.m.

Under Level 2 rules enforced in most areas outside greater Seoul, indoor fitness centers must close at 9 p.m. Internet cafes and hagwon classrooms can open throughout the day but must space out their customers, and eating isn’t allowed.

Another group of internet cafe owners recently said they were discussing similar legal action, and so have owners of indoor golf driving ranges, who have been forced to shut down their businesses due to Level 2.5 social distancing measures.

Song Gyeong-hwa, chair of the board of directors of an indoor golf driving range cooperative, told the JoongAng Ilbo that about 100 proprietors are expected to join the lawsuit.

Nam Il, the head of a kickboxing center in Uijeongbu, Gyeonggi, said he was asking gym owners in the area to form a group to protest on the streets. If the government refuses their call to reopen, Nam said, they would sue the government for damages.

“For small business owners like us, it’s a matter of life or death,” said Nam. “Government officials are just going around slapping us with business shutdown orders without considering the reality.”

The plight of fitness centers gained fresh attention Sunday when news about a Daegu gym owner committing suicide spread online, raising questions as to whether he died due to financial struggles.

Daegu police said the owner, who also ran a rehab therapy center, was found dead at around 7 p.m. last Friday in his gym. Officers said they were investigating the precise motive of his death, while ruling out any chance of foul play.