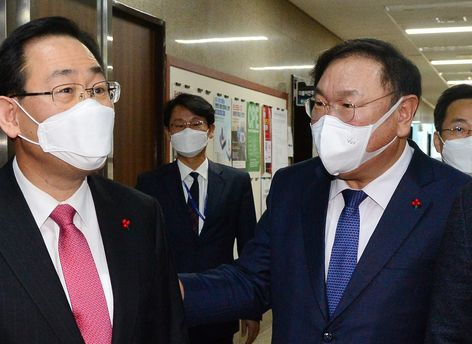 
A bill making companies more responsible for injuries or deaths of workers due to lax safety on the job is a step closer to being passed.

The floor leaders of the ruling Democratic Party (DP) and the main opposition People Power Party on Tuesday agreed to work on passing the controversial Severe Accident Corporate Punishment Act  on Jan. 8.

DP deputy floor leader Kim Young-jin on Tuesday said lawmakers on the Legislation and Judiciary Committee are reviewing the bill, which was submitted by the government on Dec. 28.

Under the proposed legislation, a company will have to pay up to five times the losses caused by an injury or death, including earnings lost.

In the case of the accidental death of a worker, the head of a company will face prison time of minimum two years or a fine between 50 million won ($46,000) and 1 billion won.

The legislation was drafted after Kim Yong-gyun, a 24-year-old employed by a subcontractor to Korea Western Power, was found dead after being sucked into a conveyor belt of a power plant in Taean, South Chungcheong, while working alone with insufficient safety precautions in late 2018.

His death raised national awareness of hazards at workplaces and the lack of protection for workers, especially contract workers not on regular payrolls, like Kim.

The bill, however, has drawn the ire of the corporate sector and labor advocates.

The Korea Enterprises Federation on Tuesday released a statement arguing that the legislation violates a constitutional principle prohibiting excessive regulations impeding a person’s basic rights, and a criminal law principle of penalizing people not responsible for something.

It said a further review of the bill should be taken into consideration and that instead of strengthening penalties, prevention of industrial accidents is more important.

Small- and medium-sized enterprise (SME) advocates have argued that the harsh penalties put the heads of SMEs at huge risk, and that some may be forced to close rather than accept those risks of doing business.

The labor sector and some political parties, meanwhile, complain that the government's bill was watered-down after objections by Big Business.

To help companies prepare for the new rules, the law will go into effect two years after it passes the National Assembly for companies with 50 to 100 employees and after four years for much smaller companies.

The government estimates that around 860 people lost their lives due to accidents at work last year. In 2019, the number was 855.

In a New Year’s address in 2018, President Moon Jae-in pledged to reduce the number of industrial accident deaths to 500 a year by 2022.