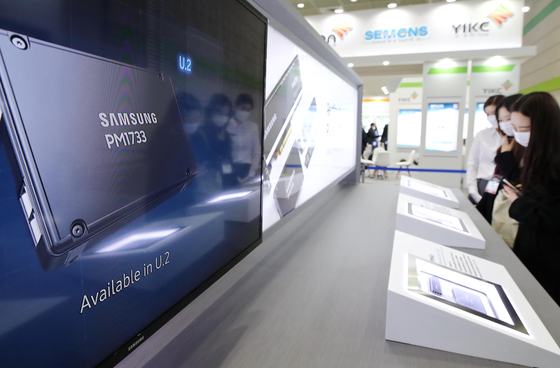 
Semiconductor exports saw one of their best performances ever last year, second only to 2018, despite the pandemic and U.S.-led sanctions on a major buyer, Huawei.

Even sharper growth is expected this year with recovery of the global economy from the pandemic, possibly leading to a so-called super-cycle, marked by high prices, as last happened between 2017 and 2018.

According to the Ministry of Trade, Industry and Energy and the Korea Semiconductor Industry Association on Tuesday, Korea’s semiconductor exports grew 5.6 percent year-on-year to reach $99.2 billion in 2020.

That’s the biggest figure since 2018, when Korea shipped a record $126.7 billion in computer chips.

In the last four months of the year, the growth rate was in the double digits.

While global demand for mobile devices including smart phones is weak, demand for laptops and chips for computer servers is robust as people work from home because of the coronavirus.

The government particularly noted an increase in system semiconductor exports, which the Moon Jae-in administration has been promoting as a promising area of business. System semiconductors include processors, image sensors and even the foundry business, which is manufacturing non-memory chips for outside customers. It is a much bigger market than memory chips, more profitable and less volatile.

System semiconductors on their own now rank among Korea's top five export items, surpassing traditional categories such as steel and petroleum products.

This year, exports of all semiconductors are expected to grow 10.2 percent to $109.3 billion, according to the government and the Korea Semiconductor Industry Association.

These projections were based on growth forecast of various institutions including the IMF as well as the Organisation for Economic Cooperation and Development (OECD), which expects this year’s global economy to grow around 5 percent.

The World Trade Organization expects global trade to grow 7.2 percent, a turnaround from a 9.2 percent contraction estimated in 2020.

The Korean semiconductor industry this year is projected to increase its investment 20.4 percent compared to last year’s to $18.9 billion.

“Last year despite Covid-19 and [global] restrictions against Huawei, the semiconductor industry led Korea’s export recovery and buoyed our economy,” said Minister Sung Yun-mo. “Semiconductors this year will not only lead the growth of exports and the economic recovery but also hasten the success of the Korean New Deal and the digital transition.”