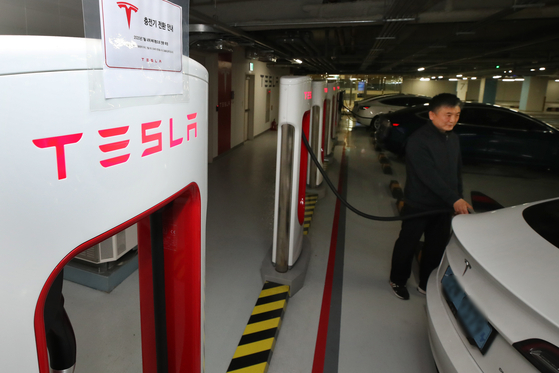 
Tesla’s dedicated chargers will be withdrawn from Emart and Shinsegae Department Store branches as the U.S. company refuses to pay the bills.


According to the two retailers Tuesday, Tesla’s 50 or so Destination chargers installed at major branches of Emart and Shinsegae Department Store will be removed this year.

The two retailers, both affiliates of Shinsegae Group, have been operating the chargers without any cost to Tesla, including the electricity bills and rent for dedicated parking slots, since 2016. The installment fee was also paid by the retailers at the time.

When the contract expired in the latter half of last year, the retailers stipulated that Tesla pay certain bills, including electricity fees, in a new contract. Tesla refused, leading the two retailers to remove the Tesla-dedicated chargers from its branches.

Shinsegae Group has been at the forefront in marketing electric vehicles (EVs) in Korea, especially Tesla, since the concept of EVs was still very new to Koreans. Its Vice Chairman Chung Yong-jin was the first owner of a Tesla in Korea.

The group's efforts to partner with Tesla early on are suspected to have derived from the expected boost the retailers would get from having the Tesla chargers visible at their stores. With Tesla becoming more common in Korea's auto market, that effect seems to have dwindled.

Other carmakers have also installed their dedicated chargers at parking spaces at retail branches operated by Shinsegae, including BMW and Porsche, but they pay their own fees.

Porsche, for example, which installed dedicated chargers at two branches of Emart last year, takes care of its own electricity bills and parking fees for dedicated space through its business partner, according to its Korean unit.

BMW, which has been installing chargers at Emart since 2014, also pays the electricity bill and rental fees.

Starfield, on the other hand, said it will continue to operate not only Destination chargers but also Superchargers, a different Tesla-dedicated charger that charges far quicker, at its Hanam branch. The Superchargers are currently being installed and the retail company aims to have them available to customers within the first half of this year.

Whether Starfield is responsible for the fees generated from the chargers, just like Emart and Shinsegae Department Store, could not be confirmed.

Emart and Shinsegae Department Store do not operate Superchargers.

Emart said it is considering filling up the newly vacant spaces with other types of chargers.

Tesla sold 11,826 units in Korea last year, according to CarIsYou data Tuesday, recording a 386.7 percent year-on-year jump. Its Model 3 was the most sold EV in Korea, having sold 11,003 units.