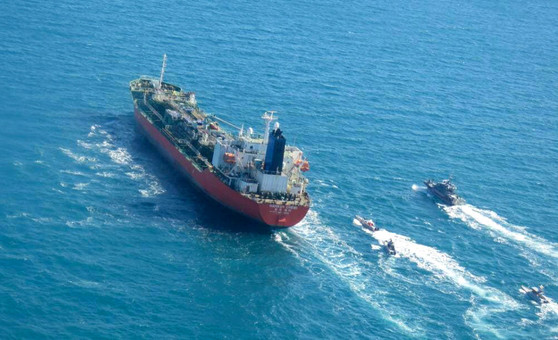 MT Hankuk Chemi, a South Korean-flagged oil tanker, is escorted by Islamic Revolutionary Guard vessels Monday to Iranian waters after being seized by Iranian authorities in the Strait of Hormuz in a photo released by the Tasnim News Agency. [AFP/YONHAP]


Iran seized a South Korean-flagged oil tanker in the Strait of Hormuz Monday amid ongoing tension with Washington and discussions with Seoul over what to do with Tehran’s assets frozen in Korean banks.

There were 20 crewmembers aboard the ship, according to the Korean Ministry of Foreign Affairs: Five South Koreans, including the captain, 11 Burmese, two Indonesians and two Vietnamese.

The ministry late Monday confirmed the seizure of the vessel which had been sailing in waters near Oman, and said that the ship was being transferred to Iranian waters on the request of Iran’s authorities. It confirmed the safety of the crewmembers and said it had requested the early release of the ship through diplomatic channels.

The Korean Navy’s Cheonghae Unit, which conducts antipiracy missions in the Gulf of Aden, arrived in waters near the Strait of Hormuz, the strategic waterway located between the Persian Gulf and the Gulf of Oman, to "support the situation," said Seoul’s Defense Ministry Tuesday.

Iranian media outlets reported that the authorities had seized the vessel, carrying 7,200 tons of ethanol, for polluting the sea with chemicals in violation of environmental laws.

The Busan-based operator of the vessel, DM Shipping, said in a statement that MT Hankuk Chemi had been sailing in international waters and denied that it had been polluting the sea.

The Revolutionary Guards said that the Korean vessel was being held at Iran's Bandar Abbas port as of Tuesday.

Koh Kyung-sok, director-general of the Foreign Ministry's African and Middle Eastern affairs bureau, expressed “regrets” over the seizure and called for Iran’s swift release of the ship and its crew.

The ambassador told reporters at the Foreign Ministry ahead of his meeting with Koh that all the sailors were “safe” and healthy.

Choi Young-sam, the Foreign Ministry spokesman, said in a press briefing Tuesday, “The Iranian ambassador made clear that this was simply a technical issue.”

However, Korea has been in an awkward position since U.S. President Donald Trump withdrew from the 2015 Iran nuclear in May 2018 and reimposed sanctions on Tehran, strangling the country’s economy.

Under the Joint Comprehensive Plan of Action (Jcpoa) — signed in July 2015 by Iran, Britain, France, China, Russia, Germany and the United States under the Barack Obama administration — Tehran had agreed to curb its nuclear weapons program in exchange for a lifting of sanctions. U.S. President-elect Joe Biden has pledged to return to the nuclear accord.

Tehran has been pressuring Seoul to unlock frozen assets, and the two countries have been working on finding a solution through diplomatic channels.

Iran holds some $7 billion in two Korean banks — the Industrial Bank of Korea and Woori Bank — which have been frozen since September 2019, when U.S. sanction waivers for Korea's imports of Iranian oil expired.

The seizure of the boat came amid recent media reports that Iran was considering proposing to Korea that its frozen assets be used to pay for Covid-19 vaccines.

The head of the Central Bank of Iran, Abdolnaser Hemmati, said last month that Tehran was hoping to use funds tied up in Korean banks to purchase Covid-19 vaccines through Covax Facility, a global initiative for fair allocation of coronavirus vaccines.

A Korean Foreign Ministry official told reporters Tuesday that the “Korean government has been working hard to expand humanitarian exchanges,” including holding eight rounds of working group meetings on the issue.

Seoul had also been in consultation with the U.S. Treasury over Iran’s request to secure a sanctions exemption for the use of the frozen assets for a humanitarian cause.

The U.S. Treasury granted “special approval” to use the Iranian funds locked in Korea for the purchase of the Covid-19 vaccines through Covax, said the Foreign Ministry official.

However, the official added, “The Iranian side has been unable to make a decision because it remains concerned over how the U.S. government will react should the remittance of money flow into the United States,” including worries that Washington will handle it as a sanctions violation.

Korean First Vice Foreign Minister Choi Jong-kun had already been scheduled for a trip to Iran next week and was expected to discuss the matter of releasing Iran’s frozen funds.

Foreign Ministry Spokesman Choi said he expects there will be “broad discussions on various issues of mutual concern for Korea and Iran” including the recent ship seizure.

The ministry will also send a delegation to Iran led by Koh to negotiate the release of the tanker and its crew.

The U.S. State Department in turn Monday called for Iran to immediately release the Korean tanker.

A State Department spokesperson said in a statement that Iran “continues to threaten navigational rights and freedoms in the Persian Gulf as part of a clear attempt to extort the international community into relieving the pressure of sanctions.”

Iran announced Monday that it had resumed enriching uranium to 20 percent purity, a move away from the 2015 nuclear deal that could further escalate tensions with the United States.

Iranian Foreign Minister Javad Zarif said through Twitter that the International Atomic Energy Agency (IAEA) had been “duly notified” of its uranium enrichment plans and that the action conforms with the Jcpoa, “after years of non-compliance by several other Jcpoa participants.”

He added, “Our measures are fully reversible upon FULL compliance by ALL,” in what can be seen as a jab at the United States and also a message to the incoming Joe Biden administration.

Suh Hoon, director of the National Security Office, immediately reported the situation to President Moon Jae-in, and the Blue House said in a statement that it is operating a response team with relevant ministries to resolve the “very serious” issue.

Korea, as an American ally, is seen by analysts to have been caught up in tensions between the United States and Iran.

A report on the CNN website Monday entitled “What to make of Iran's half-measures” described Korea as a “relatively neutral victim,” describing it has “some Iranian assets held still in their accounts, allies enough to be noticed, but none who would act over this event alone.”

Sunday marked the one-year anniversary of the death of Iran's powerful military commander, Maj. Gen. Qassim Suleimani, killed in a U.S. drone strike near the Baghdad airport on Jan. 3, 2020. 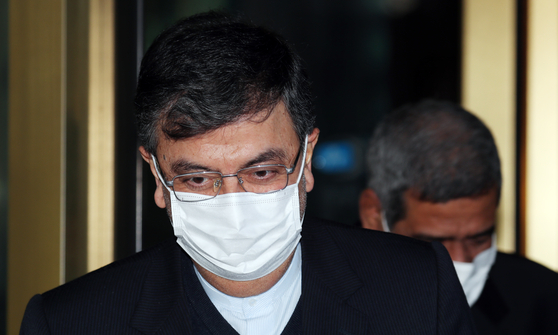 Iran's Ambassador to Korea Saeed Badamchi Shabestari is summoned to the Foreign Ministry in central Seoul Tuesday afternoon over the seizure of a Korean vessel by Iranian authorities. [YONHAP]