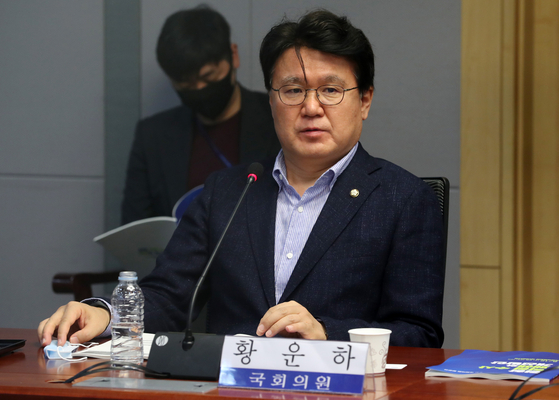 
A lawmaker is in hot water for flouting Covid-19 social distancing rules by attending a dinner in a room with five other people — two of whom later tested positive for the virus.

According to Daejeon city authorities, Rep. Hwang Un-ha of the ruling Democratic Party and former Daejeon Mayor Yeom Hong-chul met for dinner at a restaurant in central Daejeon along with a businessman on Dec. 26.

Three other people were having a meal at a different table in the same room, though they were not part of Hwang’s group and were separated by a plastic barrier set up by the restaurant, the city said.

Yeom and the businessman later tested positive for the coronavirus, as did four other family members of the latter who reside in Daejeon.

Hwang himself tested negative, but was placed under a two-week quarantine.

The gathering is generating controversy because it seems to have violated social distancing rules heightened over the holiday season, which banned all private gatherings of five people or more.

Hosts of such gatherings can be fined up to 3 million won ($2,800) — including restaurants or other commercial establishments — and participants can be fined 100,000 won.

Hwang insists that his approximately two-hour dinner with Yeom and the businessman did not go against social distancing regulations as the other three people in the room were not in his party.

After conducting an investigation, health officials sided with Hwang, noting the three other people made their dinner reservation separately and ordered their meals at a different time as Hwang’s group.

But they concluded the restaurant failed to properly respect antiviral measures, particularly in its failure to take down personal information of individual customers.

According to a Daejeon official, the restaurant’s records only showed the name of the person who made each reservation, along with words like “plus two others.” Hwang and Yeom’s names were not recorded.

Several press reports raised questions about whether the other people in the room did not belong to the same party as Hwang, alleging the lawmaker could have attempted to skirt social distancing laws by staging two separate gatherings.

There is no evidence to back up such a claim, though Hwang admitted on his Facebook page that he exchanged a greeting with one of the other three people in the room, whom he recognized.

Daejeon city officials said they legally could not disclose the identities of the other people in the room.

Despite a lack of proof, the main opposition People Power Party (PPP) pounced on the opportunity to slam Hwang for the dinner.

“Even if the dinner was just a coincidence, a lawmaker of the ruling party should have set an example by apologizing for the misunderstanding,” said the PPP’s vice spokesperson.

In the greater capital area, meetings of more than five people are liable to be punished even more strongly than outlying regions. Seoul’s regulations stipulate establishment owners must pay a 3 million won fine and could be subject to a closure order, while individual attendants can also be fined 3 million won each.

The city’s rules also state that should an infection emerge from a gathering of five or more in violation of social distancing measures, the city can charge the attendants with all costs incurred with the patient’s treatment and recovery.