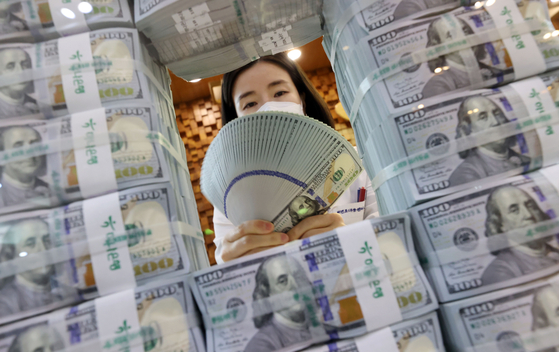 An employee of Hana Bank organizes dollars at its headquarters in Jung District, central Seoul, on Wednesday. [YONHAP]


Korea’s foreign exchange reserves hit a record in December, the seventh consecutive monthly all-time high. The record is attributed to the weak dollar against the won in recent months.

At the end of December, Korea held $443.1 billion in foreign currency, up $6.72 billion on month, according to the Bank of Korea. From June, records have been repeatedly broken. Based on data from the last week of November, when the value was $436.4 billion, Korea ranks No. 9  globally.

“As the dollar weakens, the total converted dollars of all foreign currencies have increased. The record is attributable to the increasing deposits in checking accounts and profits from managing the foreign currency assets,” the bank said in a statement.

The weakening dollar against the won played a role in the rise in the amount of Korea’s foreign currency holdings. The dollar has been steadily weakening since March because of the excessive liquidity in the market. The U.S. government and the Federal Reserve have been pumping out dollars in order to prevent the economy from stalling amid the virus pandemic.