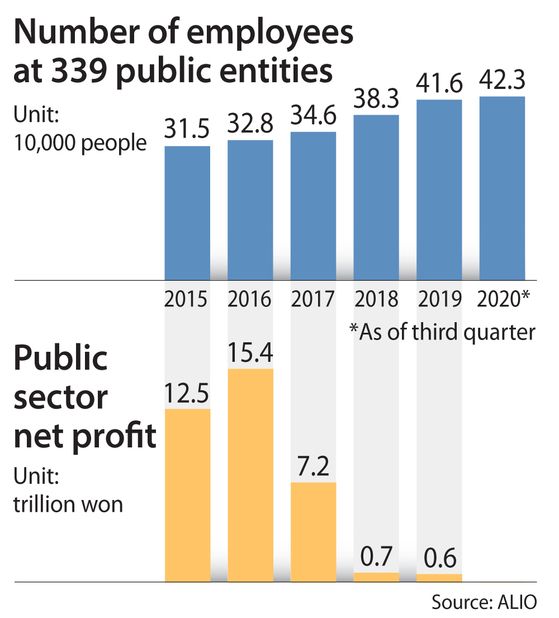 The government employee head count has been rising rapidly in recent years, and state-run company profits have been rapidly declining, leaving the country with higher costs it can ill afford and less cash flow into the state coffers.

According to Ministry of Interior and Safety, the number of administrative public officials totaled about 1.1 million as of June last year. Since May 2017, when former president Park Geun-hye stepped down, it is up by 91,602.

On a yearly basis, the number of administrative public officials rose roughly by 29,150 during the Moon Jae-in administration. That’s more than 14 times the rise in head count during the Lee Myung-bak administration, which was only 2,027 a year, and about threefold the increase under Park Geun-hye, which was about 9,498 a year.

Compared with the Roh Moo-hyun administration, which increased the number of public officials by 14,235 every year, the Moon administration has been hiring around two times more than Roh.

The 1.1 million does not include the public officials currently working for other governmental branches, such as the legislative and judicial branches, as well as for the Constitutional Court of Korea and the National Election Commission.

The number of public officials is expected to increase further as the Moon administration is currently pushing hard to achieve the goal of hiring additional 174,000 public officials to meet a campaign pledge pledged.

That’s close to numbers achieved by the Roh Tae-woo administration, which increased the number of public officials by 181,126.

According to National Assembly Budget Office, assuming that the Moon administration hires the 174,000 of the lowest-level officials, the cost would be about 327.8 trillion won ($301.6 billion) over 30 years. The Korea Taxpayers Association estimates that it would be around 419.28 trillion won.

That means that the debt for the future generation has been growing — the government’s total pension liabilities already amounted to about 94.4 trillion won as of 2019.

Although the Moon administration says hiring more public officials is an attempt to address high unemployment and to improve welfare services for citizens, increasing positions in the public sector may equal a decline in job opportunities in the private sectors. When a government job is added, job opportunities in the private sector are likely to decrease by 1.5, according to the Organisation for Economic Cooperation and Development (OECD).

“As there are a limited number of people who can pass the civil service exams, the exam itself has constantly been raising the number of economically inactive population,” said Kang Sung-jin, an economics professor at Korea University. “The hypertrophy of the public sector can lead to an expansion of regulations and prevent private companies from doing economic activities.”

According to ALIO, a state website that releases the public information, there are currently about 423,148 employees in a total of 339 public entities as of the third quarter of last year. That’s some 28.8 percent up compared to 2016.

The net profit of all public sector companies, which would be state-run companies and public entities, came to 13.8 trillion won in 2019. That’s around a 40-trillion-won decrease compared to the previous year, the largest decline since 2009 when the economy met the global financial crisis.

“If state-run companies do not care about their losses and keep hiring more employees, their profit structure is likely to worsen further,” said Kim Tae-gi, an economics professor at DanKook University. “When state-run companies have financial problems, the government must take the responsibility. This means that citizens are the ones who have to suffer at the end with the increasing tax rate.”