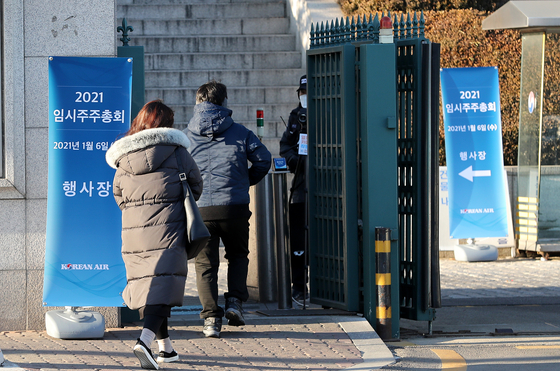 
Korean Air Lines shareholders on Wednesday approved a revision to the company's articles of association to allow for an increase in the number of shares issued, a move necessary for the acquisition of Asiana Airlines.

The second largest shareholder of the company voted against the move.

With the amendment approved, the upper limit on the number of issued shares is raised to 700 million from the current 250 million.

This will allow Korean Air Lines, the country’s biggest carrier, to issue 2.5 trillion won ($2.3 billion) worth of new stock, a financing that will fund its purchase of more than 60 percent of Asiana Airlines.

The resolution was passed at an extraordinary shareholder meeting held at company headquarters in Gangseo District, western Seoul, despite a vote against by the National Pension Service (NPS). It believes that the amendment could threaten shareholder value, and said the day before the vote that the acquisition was approved without the proper due diligence being conducted.

Seventy percent of the shareholders approved the amendment.

With an 8.11 percent stake, the NPS is the second largest shareholder after Hanjin KAL, which owns 29.09 percent of the carrier.

In a statement, Korean Air Lines said that a committee of experts has been formed to help in the integration of the two carriers.

The plan is to apply for the business combination in and outside of Korea by the middle of the month, and to complete the post-merger integration process by mid-March. It will file applications with antitrust authorities in countries it flies to, including the United States, China and Japan. The company could not confirm the exact number of applications that will be lodged.

Asiana Airlines, which was the subject of a failed takeover by Hyundai Development Company last year, approved a 3:1 capital reduction plan in December without any compensation for the exchange.

They are scheduled to release their preliminary earnings for the fourth quarter next month.