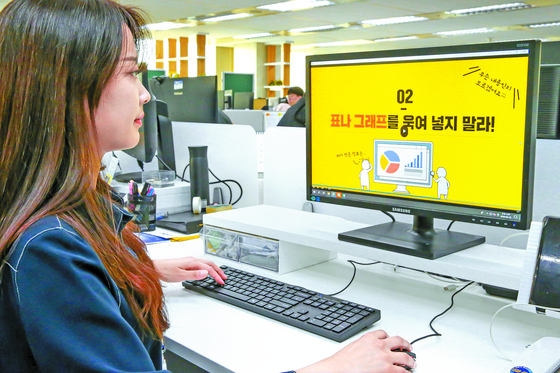 A Hyundai Steel employee uses an online system instead of paper documents. [YONHAP]

According to the Ministry of Science and ICT, the total of documents processed through its Certified Electronic Document Intermediary System, a government-backed system designed to replace paper documentation, stood at 2.94 million in 2017. That number increased to 4.43 million in 2018, 13.8 million in 2019 and 27 million in the first three quarters of 2020.

Meanwhile, the amount of paper produced has been declining — a total of 1.67 million tons of paper were produced in 2015, decreasing to 1.45 million tons in 2019, according to the Korea Paper Association. 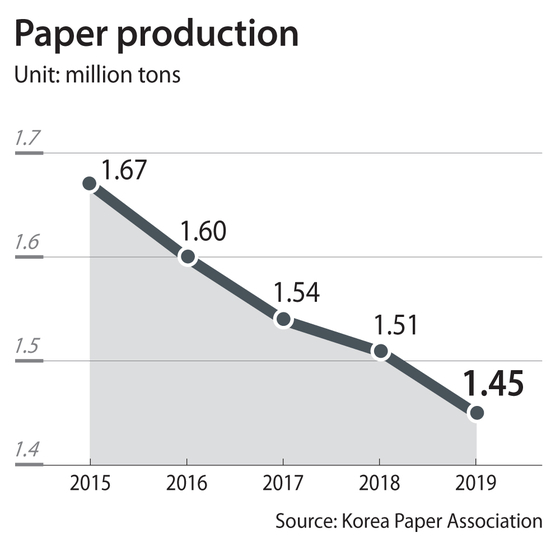 The financial sector has been one of the quickest movers.

Mirae Asset Life last month made all of its insurance and loans products paperless — a first in the Korean insurance industry. Even when purchasing products, customers can handle the entire process on screen rather than on paper.

Many commercial banks including Shinhan Bank and KB Kookmin Bank have also shifted to paperless systems and have been running campaigns to encourage customers to go paperless.

Linked automatically to data from the Government Employees Pension Service and Korea Financial Telecommunications & Clearings Institute, it aims to reduce the cost and inconvenience of having to submit paper documentation.

Going paperless not only benefits companies but also customers.

Without the need for physical paper documents, financial companies can improve their work efficiency, as well as save money. Customers no longer have to go through the complicated process of reading and signing many different sheets of paper whenever they apply for different financial products.

Retailers are also trying to cut down on paper.

With face-to-face lectures and classes shifting to online lectures, the paperless system has become more common in the education sector as well.

According to the Ministry of Education, the total number of digital textbook downloads made by teachers and students was about 16.12 million during the March-to-October period last year, a fourfold increase compared to the same period a year earlier.

Major companies have also been shifting their workplace and tools online, releasing official reports digitally and using tablet PCs to access documents in the workplace.

As companies rush to go, related industries are scrambling to improve their services.

Fintech companies such as Kakao Pay and NHN Payco have introduced digital wallet services as well as mobile easy-payment services that allow customers to check their bills and pay with their smartphones.

According to the Science Ministry, the digital document market is likely to grow further along with the revised Framework Act on Electronic Documents and Transactions that went into effect on Dec. 10. The revised law requires digital documents to be recognized and treated with the same authority as paper documents.

“[The revised law] will expand the use of digital documents and help to accumulate data more rapidly. It will lead our society into the paperless era,” said Heo Seong-wook, an official from the ICT Policy Division at the Science Ministry. “By 2023, we are expecting to save roughly 1.1 trillion won ($1 billion), as well as establish a new market that is worth some 2.1 trillion won.”

Some critics, however, are concerned about the speed of the transition. They argue that some people, such as elderly people, low-income households and foreign residents, will struggle with simple tasks like financial transactions.

Security issues are also a concern.

Unlike paper documents, which can easily be monitored and destroyed, the information contained in digital documents could be stolen if systems are hacked.