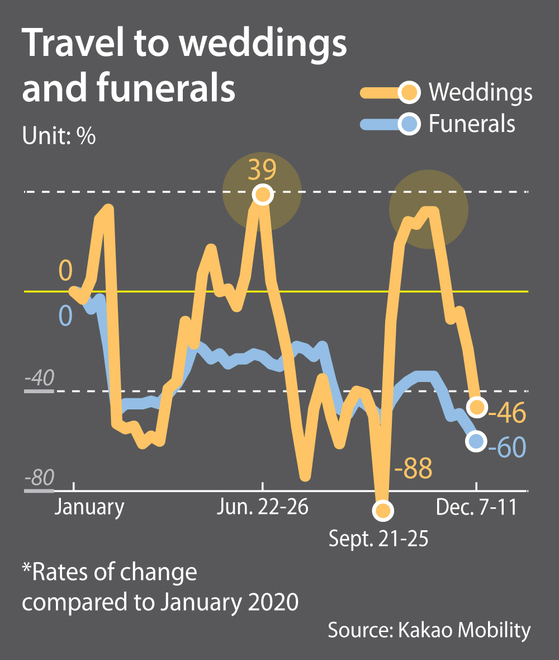 Post-pandemic, the world will be a very different place, and we will be far more digitally connected than before Covid-19, companies that make and sell digital products believe.

Throughout the crisis, Kakao Mobility has been watching and analyzing our movements, comparing where customers traveled before and after the pandemic. According to data from its Kakao T app, people went to parks and hotels 41 percent less, while funeral and wedding-related travel dropped 43 percent.

During months when the virus case numbers declined, leisure activities increased. They were up 95 percent in the beginning of May and 41 percent in mid-October, but travel to ceremonies was 2 percent lower in May and 22 percent lower in October. The recovery in the traffic for entertainment venues was higher than for ceremonies. From August to December, the number of visitors to funerals held at Samsung Medical Center’s funeral center was 81, one-third of the average during the same period in 2019.

Mobile money gifting is becoming a common practice. A 33-year-old office worker who got married in December in Gyeonggi received 80 percent of her wedding gifts via Kakao Talk.

“People who sent the gifts were a bit embarrassed, but receiving the gifts in this manner was refreshing, and I felt thankful,” she said.

The usage of Kakao’s envelope function for wedding occasions rose by 100 percent in August and 353 percent in December compared to January 2020.

Changes are occurring in corporate culture as well. As people stay at home for work for a long period of time, companies are implementing new workplace structures. LG Chem in April 2020 introduced a smart work system for company employees in Korea, the United States, Europe and China. All conferences take place virtually.

Companies "figured out which connections are not essential to their performance,” said Chang Duk-jin, a sociology professor at Seoul National University. “Going forward, companies will spend less time and effort in maintaining the networks, and the social capital will be expended in a more efficient manner.”

Mobile technology is being used for child care. Since August, SK has been using the day care services of Tictoc Croc for its employees. The children engage in art, cooking, music and foreign language classes virtually with the program’s teachers. About 500 children have participated, and the company says the satisfaction rate is high.

The boundary between work and life is becoming increasingly blurred for people who work from home. Home has become a multiplex for work, relaxation and culture, and the interiors of homes have thereby become more important.

Consumption patterns demonstrate this. From February to June in 2020, sales of diffusers and candles rose by 130 percent on year. High-end mattress sales were up 24.3 percent. During the second half of 2020, when coronavirus cases resurged, people started redesigning their homes. Sales of paint and tools were 5.4 times more than during the same period a year earlier. Sales of loungewear rose by 83 percent on year, exceeding the sales growth of formal wear.

The coronavirus pandemic has led people to think and act locally, shifting away from the global perspective for the time being. However, more retail investors have started to invest in foreign stocks.

A 41-year-old employee of a global IT company and a resident of Cheongdam-dong, southern Seoul, worked from home for the whole of 2020. He woke up every afternoon for work in a U.S. time zone and more frequently visited markets in his neighborhood. At the same time, his increased interest in the U.S. stock market led to his purchase of Tesla stock.

Mo Jong-ryn, a professor at the Graduate School of International Studies at Yonsei University, said the center of living will shift from the city to neighborhoods in the post-coronavirus era. High density will no longer be a competitive edge for cities.

“The age of growth and job creation centered around major corporations is coming to an end,” said Mo. “Now, a neighborhood needs to have housing, jobs and commercial facilities all in it.”