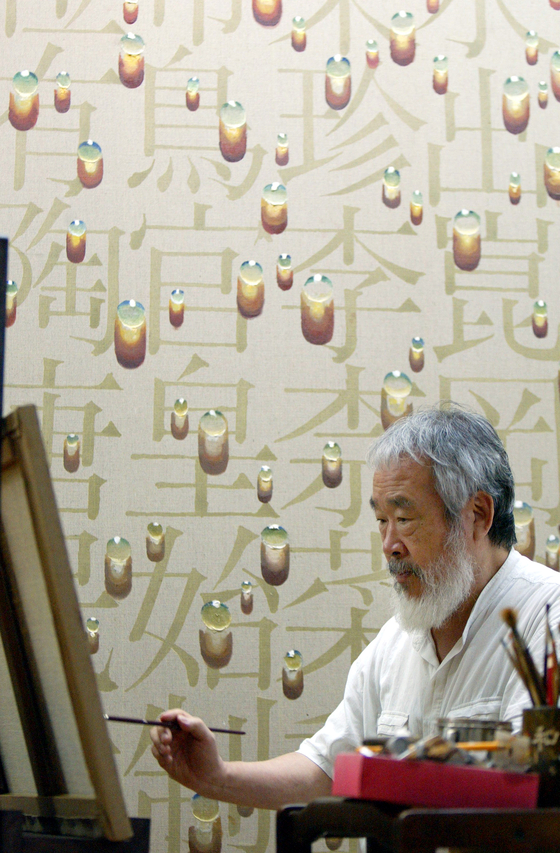 Artist Kim Tschang-yeul at his Seoul studio in 2002. [PARK JONG-KEUN]


Kim Tschang-yeul (1929-2021), a renowned Korean artist often dubbed the “water drop painter,” passed away on Tuesday at the age of 91, according to his family.

The Kim Tschang-yeul Art Museum, a municipal museum of Jeju Island dedicated to the artist’s works, and Gallery Hyundai in Seoul, a major gallery in Korea which held 14 solo shows of Kim including his last exhibition titled “Path” last autumn, also announced his death.

The artist “explored the essence of painting via his glistening water drops and use of the text from the Chinese Thousand Character Classic, delicately embedding his works with an Eastern philosophy and spirit,” Gallery Hyundai said in the announcement.

Water drops have become Kim’s signature since he showed his first paintings using such motifs including “Event of Night” (1972) at the “Salon de Mai” show in Paris in 1972 and received favorable reviews.

His oil paintings create illusions of real water drops forming as brightly shining beads on canvas. While some are entertained by the optical illusion, which is in the Western tradition of trompe-l’œil techniques, some find the stillness of the water drops and empty spaces on the canvases to be meditative in the Eastern Zen tradition.

When the Korea JoongAng Daily asked him about the meaning of water drops at the Kim Tschang-yeul Art Museum in 2017, the artist said, “Its meaning is meaninglessness.”

This answer, which sounds like a Zen riddle, can be partly solved by a note written by the artist for a 1988 solo show in Tokyo. He wrote, “My act of painting water drops is the act of having everything dissolve in water drops and return to transparent ‘nothingness.’ When everything — including anger, anxiety and fear — is returned to ‘emptiness,’ we will experience real peace.”

Kim was born in Maengsan, now in North Korea. He began to study painting in his teens and learned from the famous painter Lee Quede (1913-65). In 1949, he entered the fine arts college of the prestigious Seoul National University but had to quit the following year because of the breakout of the Korean War (1950-53).

After serving as a police officer for a while, he returned to painting while working as an art teacher at high schools. After becoming a professional artist in the late 1950s, he led the Korean version of the Art Informel movement, which started in France, along with Park Seobo and Chung Chang-sup, who are now called the masters of dansaekhwa, or Korean monochrome paintings. 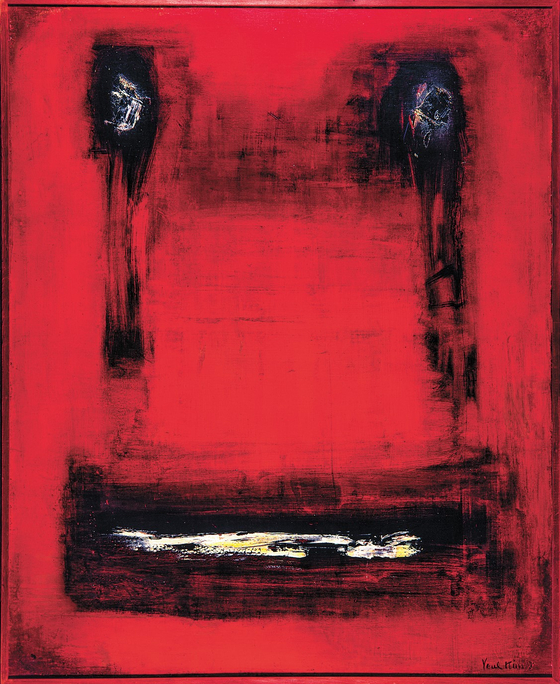 ″Rite″ (1964) is one of Kim Tschang-yeul's Art Informel paintings. [NATIONAL MUSEUM OF MODERN AND CONTEMPORARY ART] 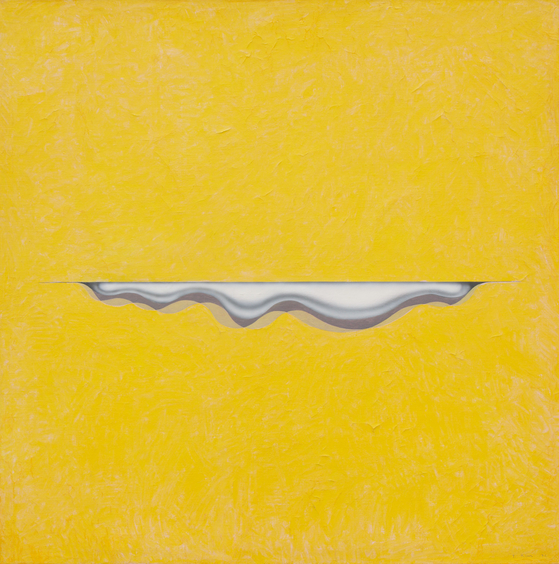 
Abstract paintings of Art Informel, associated with American abstract expressionism, are characterized by emotional colors and gestural brush strokes. Kim expressed his scars and trauma from the Korean War through such paintings.

In the late 1960s, Kim got a scholarship from the U.S. Rockefeller Foundation at the recommendation of the Korean modern art master Kim Whanki (1913-74). With the scholarship, Kim Tschang-yeul studied print making at the Art Students League of New York. After studying, he created the new “Phenomenon” series, which is regarded as the bridge connecting his Art Informel paintings and the later “Water Drops” series. Many of the “Phenomenon” paintings depict liquid drops coming from slits, which can be interpreted as tears or body fluid from scars.

In 1969, Kim went to Paris to participate in the Avant-Garde Festival. In the following year, he rented a stable as his studio in a village about 15 kilometers (9.3 miles) from Paris. While actively working, he met and married Martine Jillion, who has been his lifelong partner. 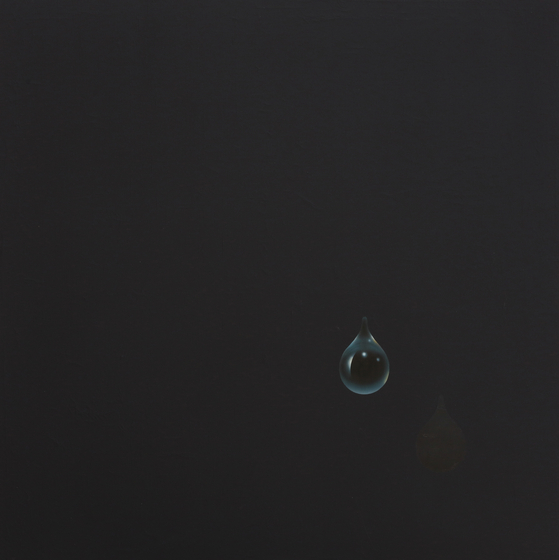 
After winning critical acclaim with his first water drop paintings in the Salon de Mai exhibition in Paris in 1972, he focused on the theme and developed it in diverse ways over more than 40 years. They include “one water drop dominating the canvas, water drops filling the entire canvas [...] and water drops that seem to run down or to have soaked into the surface right away,” explains the Kim Tschang-yeul Art Museum on its website. “By creating such diverse water drops, his media also changed to include newspapers, hemp cloth, sand and wooden plates as well as canvas." 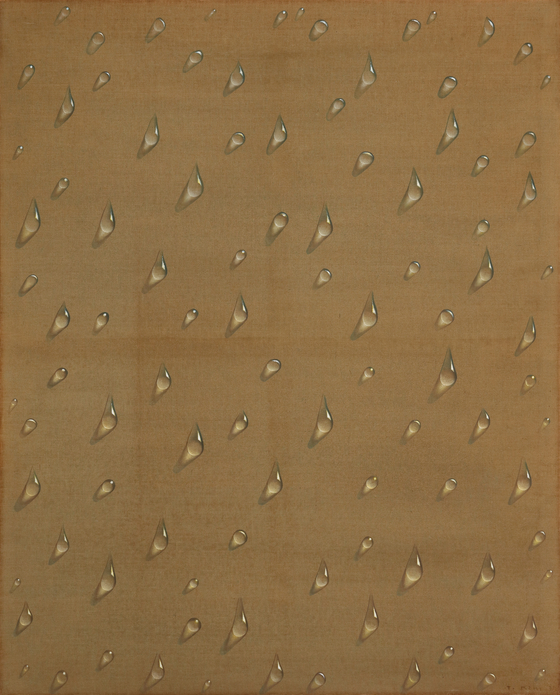 
Kim started the “Recurrence” series which depicts water drops with Chinese characters as the background in the mid-1980s. Commenting on his use of Chinese characters, the artist said, “The printed letters emphasize the soft texture of the water drops. And I prefer Chinese characters to other letters because they look solid and because I have a certain nostalgia for the letters I learned from my grandfather when I was a child.”

When the Korea JoongAng Daily asked the artist why he has continued to paint water drops for four decades at his solo show at Gallery Hyundai in 2010, Kim said, “Artists with minimalist leanings cannot make versatile works.” But when another reporter asked the same question later, he said playfully, “Oh, I feel like giving a different answer this time. I get this question so many times and give a different answer each time.”


Art critic Kim Yong-dae compared Kim’s repeated painting of water drops to the practice of Buddhist monks. He said, “Like a monk in training who works bent forward for hours and days, the artist repeats the process.”

In the 2000s and 2010s, the artist worked in both Seoul and Paris. In 2016, the Kim Tschang-yeul Art Museum opened at the Jeoji Art Village in western Jeju Island. Although the island is not where Kim was born, he lived there during the 1950-53 Korean war. “I love Jeju Island — its water and its sunlight,” Kim said at the museum in 2017, adding that the region is reminiscent of southern France.

The painter was one of the best-known Korean artists abroad. He was granted the medal Chevalier de L'Ordre des Arts et des Lettres by the French government in 1996. He also won the Eungwan Order of Cultural Merit granted by the Korean government in 2013.

He is survived by his wife, Martine Jillion Kim, and two sons, Simon Kim, who is a professor of French language and literature at Korea University, and Oan Kim, a photographer.