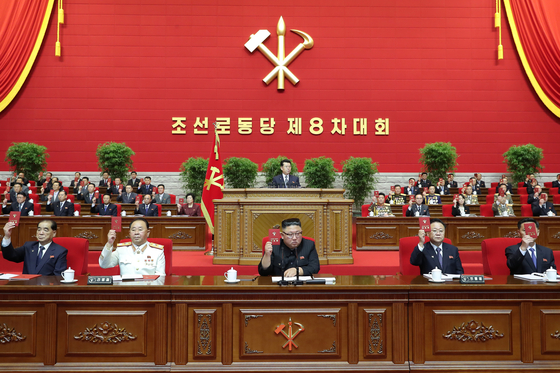 North Korean leader Kim Jong-un, center, and top party officials sit at a leadership podium to mark the opening of the 8th Congress of the ruling Workers' Party on Tuesday. [NEWS1]


Kim Jong-un admitted his regime fell "extremely" short of meeting its economic goals over the last five years at the opening of a rare ruling party congress Tuesday.

Kim presided over thousands of party delegates gathered in Pyongyang for the 8th Workers' Party Congress, the biggest political event in North Korea.

While stressing the importance of the congress as a "stepping stone" toward a great "leap," or achievement, Kim also made a rare admission of failure in an address, noting the regime's five-year plan that ended last year "in almost all areas fell extremely short" of its objectives.

Challenges undermining the regime's progress came "both from outside and inside," Kim said, in an apparent reference to international sanctions that have throttled North Korea's economy.

As for the "flaws" in the country's own efforts, Kim stressed that "painful lessons" should not be repeated, and that strong measures should be established to prevent errors from evolving into greater problems, according to a Korean-language transcript of his speech released by state media.

Kim's emphasis on domestic inadequacies stood out as remarkable given the regime's penchant for laying blame for its own misfortunes on the outside world.

The last time North Korea openly admitted its failure to meet economic goals, with its abandonment of a seven-year plan in 1993, it blamed radical changes in the international scene brought on by the collapse of the Soviet Union.

Kim made no comments on foreign or inter-Korean policies during the event's first session Tuesday, which was largely devoted to the economy and the response to Covid-19, as well as token summaries of successes of the past five years.

The official Korean Central News Agency (KCNA) did report that "important issues arising in accomplishing the cause of national reunification" and "promoting external relations" would be among the strategic and tactical policies Kim would outline presumably later in the congress.

This week's congress is meant to raise morale and set new aims to overcome a 2020 annus horribilis. In addition to the continued strain of sanctions, trade with China dried up due to Covid-19-related border restrictions, and intense typhoons in the summer heavily damaged key grain producing areas.

A new five-year plan to replace the unfulfilled old plan is expected to emerge at later sessions of the congress this week.

Kim himself underlined the "need to start work for further developing the overall economy of the country," in particular pointing to key industrial sectors like metals, chemicals, electricity, coal, machines and the mining industries.

The dictator's "work report" to the congress is the highlight of the event, and is expected to continue for at least another day until Wednesday.

South Korean experts noted Kim's speech marked a major departure from a regime prone to blaming its foreign adversaries for all ills, striking a clear reformist tone consistent with the dictator's attacks on internal corruption this year.

"Chairman Kim himself appears to realize the seriousness of the internal problems facing North Korean society," said Lim Eul-chul, a professor of North Korean studies at the Institute for Far East Studies at Kyungnam University.

"[We can] observe [in his address] a will to take note of popular sentiment, and prepare more realistic and practical measures."

Attempts to canvass public opinion were apparent in Kim's comment that the party's Central Committee organized a special commission last year to listen to the opinions of workers, farmers and the intelligentsia across the country. Opinions were recorded as to what went wrong and what could be improved, as well as flaws in the party's guidance, Kim said.

For the leaders of a strictly hierarchical North Korea to welcome public feedback in such a way could signal a major change forthcoming in the regime, possibly bigger than any seen in Kim's decade-long rule, Lim said. 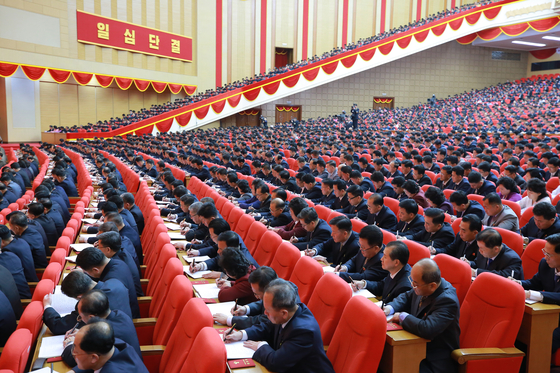 Delegates and participants of the 8th Party Congress jot down notes as Kim delivers his address at the event. Several thousand were packed into the auditorium for the congress, though not one wore a mask. [NEWS1]


KCNA reported that a total of 4,750 delegates elected from work and provincial units nationwide, 250 members of the party's central headquarters, and an additional 2,000 ordinary spectators attended the congress in Pyongyang on Tuesday.

Despite an intense social distancing campaign the regime had been waging, none of the participants wore masks, nor sat apart from each other inside a massive auditorium.

North Korea claims it has had no confirmed Covid-19 cases on its soil, though that has been doubted by foreign observers.