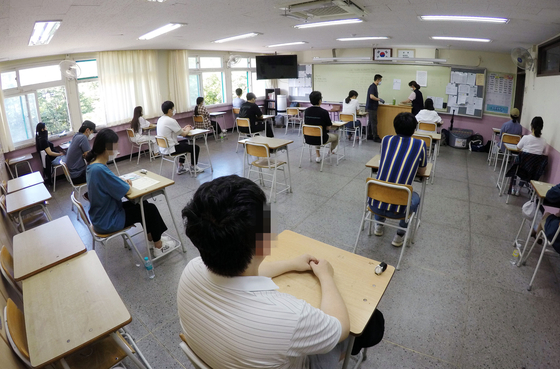 In this file photo, a civil service exam for entry-level positions is held at a high school in Seoul on July 11, 2020. [YONHAP]


The Moon Jae-in administration’s aggressive hiring of new civil servants is prompting concerns about the snowballing cost to taxpayers.

According to data from the Ministry of Interior and Safety and the Government Organization Management System, the Moon administration employed nearly 1.098 million public servants as of the end of last June. That number includes those hired by central and regional governments as well as fire departments, social welfare offices and education offices nationwide.

It was 91,602 higher than the number during the administration of predecessor Park Geun-hye, marking an increase of 9.15 percent.

According to the data, an average of 29,150 new civil servants were hired yearly since Moon took office — about three times the annual average of 9,498 during the Park presidency and about 14 times the Lee Myung-bak administration's average of 2,027.

Apart from the civil servants working for the administration, another 25,000 public servants are currently employed by the legislature, judiciary, Constitutional Court and National Election Commission.

As government jobs are increased, the bills continue to mount.

According to the National Assembly Budget Office, hiring 174,000 entry-level public servants will require nearly 328 trillion won ($302 billion) for the next 30 years. A civic group, the Korea Taxpayers Association, estimates that the government will need to spend over 419 trillion won on its workforce. Neither amount includes pensions paid to civil servants in retirement.

As of 2019, the accrued liability for pension programs for retired civil servants and military members was over 944 trillion won.

The Moon administration said it is hiring more civil servants to put a dent in youth unemployment and improve the quality of government services. Some analysts claim that more jobs in the public sector actually decreases unemployment in the private sector. According to a report by the Organisation for Economic Co-operation and Development, 1.5 private sector job disappears for each new public sector job.

Experts also worry that many people will stop looking for private sector jobs to prepare for the exams to qualify for a civil service job and career. An average of 250,000 people apply for the exam every year. The Hyundai Research Institute said about 17 trillion won of opportunity cost is lost because they do not participate in economic activity while preparing for the exam.

“The number of unemployed preparing for the exam will grow,” said Kang Sung-jin, a professor of economics at Korea University. “And the competitiveness of private companies will be affected because they miss the opportunity of hiring capable workers.” 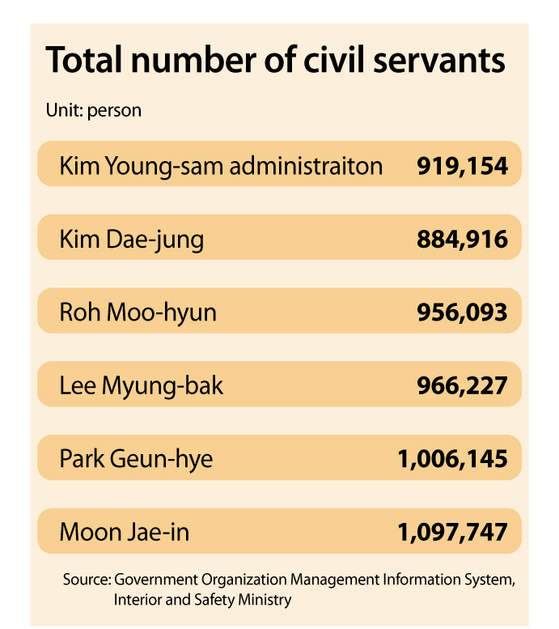 In addition to central and local government jobs, state-owned and state-invested public companies are also aggressively hiring. According to the official management database of the public companies, 339 public companies nationwide had 423,148 workers during the third quarter of 2020, up by 28.8 percent from the same period in 2016.

“If the public companies continue accommodate the government’s demands [to hire more workers], their losses will grow,” said Kim Dae-gi, professor of economics at Dankook University.

“At the end of the day, the government is responsible for the poor performance of public companies," said Kim, the professor at Dankook University. "The situation will lead to tax hikes and increases in utilities prices, ultimately costing the entire public.”