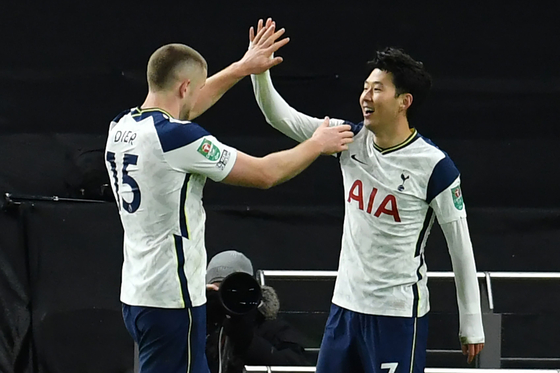 
Shortly after scoring his 100th goal for Tottenham Hotspur, Son Heung-min is at it again.

Son picked up his 101st goal in a Spurs jersey during Tottenham's 2-0 win over Brentford F.C. in the semifinals of the Carabao Cup at Tottenham Hotspur Stadium on Tuesday.

Spurs got off to a quick start as Moussa Sissoko scored the opener in the 12th minute. Then, with Spurs up 1-0, Son extended the lead by scoring another in the 70th minute, this time assisted by Tanguy Ndombele.

This was Son’s 16th goal of the season.

As Brentford’s Josh Dasilva was given a red card in the 84th minute, Spurs easily picked up a 2-0 victory and advanced to the final of the Carabao Cup.

Spurs will compete for the Carabao Cup trophy against either Manchester United or City on April 25, with the two Manchester sides facing each other in their semifinal on Wednesday night local time, or at 4:45 a.m. on Thursday in Korea.

“We work for ourselves, for our pride, for our own jobs, but at the end of the day, we work for the fans,” Spurs head coach Jose Mourinho was quoted as saying on Spurs website. “So, I’m really happy because we managed we managed to give them that happiness, but finals without trophies are sad days, finals with trophies are amazing, eternal days in our memory.”

Along with Spurs’ victory, this was another record goal for Son as it was his 150th career goal in Europe. With 16 goals this season, Son is now only five goals away from tying his record season with 21 goals.

Son started his career in Europe in Germany by playing for Hamburger SV in the 2010-11 season. He moved to Bayer Leverkusen in the 2013-14 season, before moving to the Premier League as he joined Spurs in the 2015-16 season.

Since his second season in 2016-17, Son has managed to score more than 16 goals every season.

Spurs will continue their season with a third round FA Cup match against seventh-tier side Marine A.F.C. on Monday at 2 a.m., Korea time. Then, they’ll be heading to Villa Park to face Aston Villa in the Premier League on Jan. 13, starting at 5:15 a.m., Korea time.