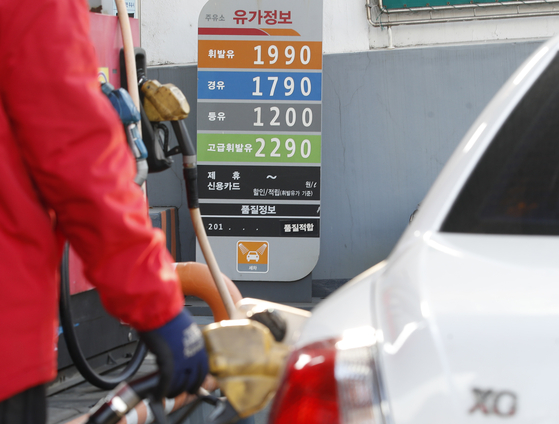 
Lee Min-young, a 39-year-old office worker and resident of Samseong-dong, southern Seoul, was startled upon her visit to a gas station in her neighborhood, when she saw that the price of gasoline was 1,528 won ($1.41) per liter. The price was 100 won higher than when she filled up her vehicle at the same station a month earlier.

“Last year, the oil price was low due to the impact of the coronavirus pandemic, but the burden has become heavier from the beginning of this year,” said Lee.

Korea’s oil prices are on the rise. According to Opinet, a website with oil price information run by Korea National Oil Corporation, the average price on Tuesday for stations nationwide was 1,430 won per liter. As the coronavirus pandemic became worse, the price dropped to as low as 1,247 won per liter in May. Seoul’s gas prices exceeded 1,500 won per liter as of Jan. 2. The prices recovered to the 1,500-won level for the first time in nine months. 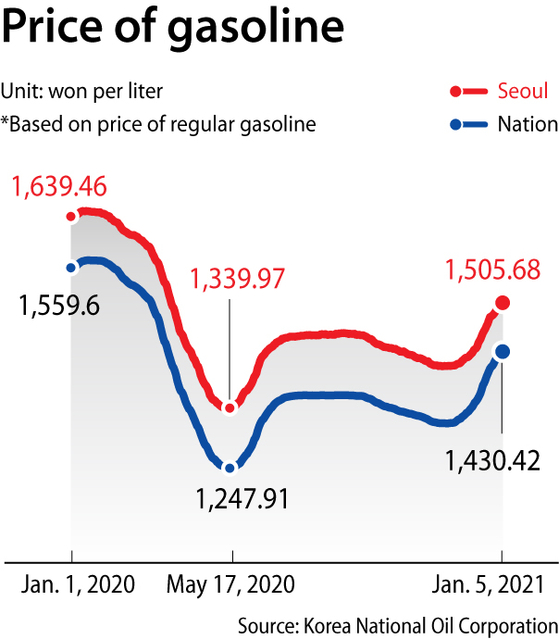 There are some factors fueling the surge. The international oil price on Tuesday spiked by a large margin following the news of Saudi Arabia’s voluntary cuts in its oil production by an extra one million barrels per day in February and March. West Texas Intermediate (WTI) crude for February delivery closed at $49.93 per barrel after rising 4.9 percent.

At mid-day Tuesday, the price broke $50 per barrel for the first time since February after the oil ministers of the Organization of Petroleum Exporting Countries (OPEC) and OPEC plus, which is a group of non-OPEC, oil-exporting countries, agreed on the rate of production increase for February and March that was lower than expected.

The increase in oil prices is ringing alarm bells for some because it may signal a gradual rise in consumer prices due to the weight of gas in the consumer price index (CPI). According to Statistics Korea, gasoline ranked fourth after jeonse, rent and cellphone bills in terms of index weighting, giving gas prices an outsized influence on CPI.

"When oil prices increase, the costs of raw materials and distribution will increase as a result, and the prices of petroleum products will end up rising as well after a while,” said Lee Doo-won, the director of the consumer price statistics division at Statistics Korea. “The overall consumer prices for necessities could fluctuate.”

Yet, the growth trend for oil prices may not be a red flag.

“The recovery of the oil price is a natural sequence, especially after overcoming the coronavirus pandemic crisis, which caused a sharp drop in the international oil prices,” said Lee Dal-sok, a senior researcher at the Korea Energy Economics Institute. “If the decrease in production overlaps with increase in demand, it can be seen as a sign of economic recovery.”

Till the last drop