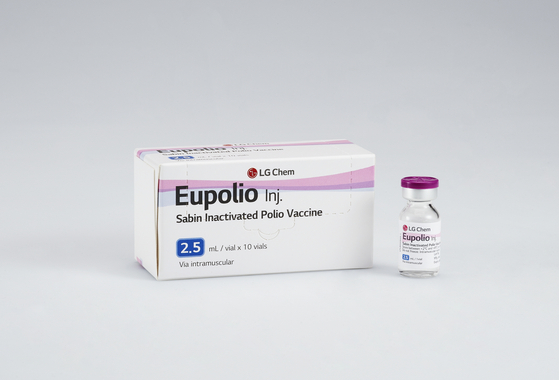 The type of vaccines LG Chem will provide are inactivated vaccines to fight off polio, or poliomyelitis, a highly infectious disease that causes paralysis in children. The disease is largely extinct in advanced countries, but remains active in several regions of Africa, Southeast Asia and the Middle East.

According to World Health Organization (WHO) data, the number of polio infections reached a historic-low in 2016 but rapidly bounced back in the past two years to reach nearly 1,000 last year.

The deal makes LG Chem one of five Unicef suppliers for inactivated polio vaccines, and the third largest in terms of supply volume, the company said. LG Chem’s vaccines will account for 20 percent of Unicef’s entire polio vaccine supply.

The Korean companies’ vaccines will be distributed to 70 countries worldwide from next month.

Vaccines work by injecting an infectious agent, weaker than the actual disease but strong enough to create an immune response in the body. Inactivated vaccines consist of an infectious agent that has lost its disease-producing capacity.

In the past, polio vaccinations were mainly done with live, attenuated vaccines in which the infectious agents remain active, as they provide a stronger immune response. But attenuated vaccines also had the negative effect of spreading infections, as the virus remains active after inoculation and spreads to the local community, LG explained.

In 2014, the WHO announced that the use of live polio vaccines should eventually be stopped and suggested expanding the use of inactivated vaccines.

LG Chem started developing inactivated polio vaccines from that point, targeting a market where supply was to fall short compared to live polio vaccines that had been around for decades. In 2017, it received funding from the Bill & Melinda Gates Foundation, from which it was backed with $57.6 million so far.

In late December, the Korean company obtained a pre-qualification from the WHO required for global vaccines distributed by international relief organizations.

“Through cooperation with the Bill & Melinda Gates Foundation and Unicef, LG Chem was able to step up as a major global supplier of polio vaccines,” said Son Jee-woong, who leads LG Chem’s Life Sciences unit.

This is the company’s third vaccine to be distributed worldwide through international relief organizations.