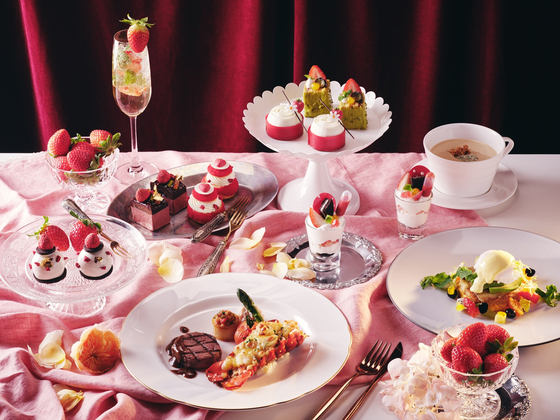 
When it’s too cold outside, locals here often say that they want to lie down on heated floors under a blanket and peel tangerines to eat while watching TV.

That desire may be adjusted slightly this year after the sales of strawberries surpassed those of Korean tangerines at Emart this winter.

Sales of strawberries in December was about 13 billion won ($12 million), up 30 percent from the year before. They were the fourth most sold item at Emart last year, following wine, ramyeon and beer.

Out of all the fruit sold at Emart, strawberries took over 30 percent of total sales. Next in line were Korean tangerines taking 14.3 percent and muscat grapes with 11.7 percent.

These easy-to-eat fruits are getting more popular, according to Emart, quoting the general analysis of the industry.

It has also said that the increasing number of home bakers have contributed to pushing the sales of strawberries because the fruit is often used as a decoration.

Diverse species of strawberries available on the shelves at retailers also drive the sales of the fruit up. For those who prefer a sweeter taste, the Merry Queen species has a high sugar content while Kingsberry offers larger, multiple-bite-size strawberries.

“Since many have only seen the differently colored strawberries overseas or at a department store, many find it interesting,” said Kim Jong-yeol, the manager of Homeplus’ fruit buying team.

“We have exclusive contracts with two farms in Handong and the fruit gets sold out as soon as we have it on the shelves, as people who have tasted it once continue to buy again.”

“It is quite popular these days for strawberries to make double the sales of traditionally well-known winter fruit Korean tangerine,” Kim said.

The steady popularity of the fruit is also evident from the annual events run at local hotels that are centered around the red fruit. The hotels, which used to start their promotions in January, now start from December.

Strawberry-themed promotions, which first started in 2007 by two InterContinental hotels in Gangnam District, southern Seoul, have continued for over a decade and more hotels are jumping on board to make events with the particular berry every year.

These promotions at first focused on serving desserts made with the fruit, but given that many asked for some savory treats to pair with the sweet strawberries, hotels started to add their own specialty items to their menus.

With concerns about remaining socially distant and safe amid the coronavirus pandemic, hotels running strawberry promotions, often done in a buffet-style, have decided to offer individual platters or afternoon tea sets. 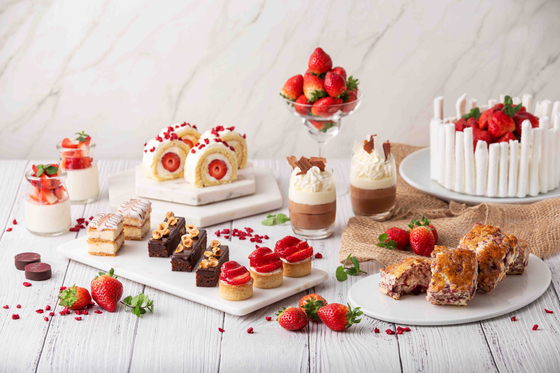 
The Grand Hyatt Seoul in Yongsan District, central Seoul, unveiled its afternoon tea set alongside its special strawberry champagne bingsu, or shaved ice. It made sure to put the strawberries in the very bottom before the ice covers them, so that customers can save the best for last and enjoy a bite of the red berry at the end of the dish. The bingsu is topped with a sherbet made with champagne. The afternoon tea set is priced at 50,000 won and the bingsu is 40,000 won.

Novotel Ambassador Seoul Dongdaemun Hotel and Residence in Jung District, central Seoul, unveiled a brunch set alongside the strawberry afternoon tea set for those who want to fill up with something savory before digging into the dessert options. The brunch platter with grilled sausage, omelet, penne pasta and more, alongside a strawberry coconut blended drink, is 35,000 won for one person, and 66,000 won for two.

Four Points Gangnam in Gangnam District offers a combination of strawberry and chocolate fondue alongside lobster rolls and onion rings in an afternoon set for 69,000 won, big enough for two.

Sheraton Seoul D-Cube City Hotel offers a set with savory treats like salmon sushi, king crab and scallop tartare topped with caviar alongside beef steak and more. You can end the meal with strawberry tart, strawberry mouse and more. It is priced at 88,000 won for two.

Why take away the fun of browsing all the options on display? JW Marriott Dongdaemun Square Seoul decided to offer two different options: a buffet style as well as the afternoon tea set. The hotel offers its treats in a room decorated with a Barbie theme. The price per person starts from 55,000 won. 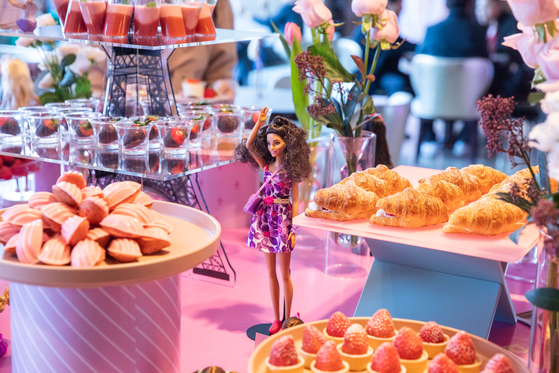 Banyan Tree Club and Spa, which offers a buffet style event, also offers a box of fresh strawberries for guests to take home and enjoy. The buffet is priced at 68,000 won per person.