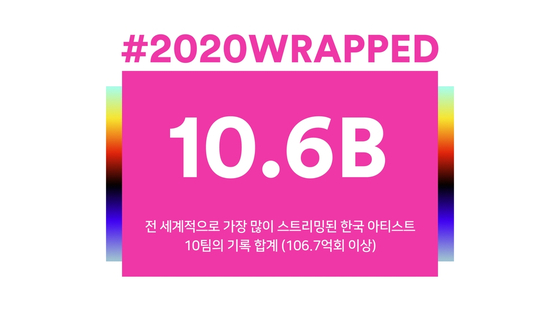 
BTS was the most-streamed K-pop artist last year on global music streaming service Spotify, according to the service’s 2020 Wrapped data on Thursday.

The band which released hits such as Grammy-nominated “Dynamite” and “ON,” was 2020’s most-streamed group globally and also made it to the top 10 artists in 2020.

The platform, which is planning its launch in Korea in the first half of this year, also disclosed data on the top 10 most-streamed K-pop artists of 2020, which accumulated some 10.6 billion streams.

IU and Agust D, better known as BTS’s Suga, were the most-streamed solo female and male artists of the year.

In the hip-hop and R&B genres, Zico’s “Any Song” and “Candy” from EXO's Baekhyun were the most-streamed songs. In the category of original soundtracks for television drama series, “Sweet Night” from JTBC series “Itaewon Class" by V from BTS recorded the most streams.

On the Radar Korea playlist, which introduces rookie artists to global listeners, boy band Treasure was the most recognized group of the year.

2020 Wrapped was collected from streaming data between Jan. 1 and Nov. 15 last year.