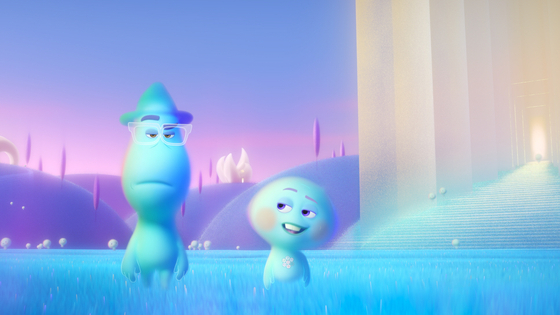 
What is the purpose of life?

Is it achieving your dreams? To become a great person or someone who could leave a mark on the world and its history?

For those who feel lost, the Pixar animated film “Soul" (2020), contains the answers to these questions. And the film manages to convey its message without dragging complex philosophies or theories into the story. It's based on the seemingly average life of middle school band teacher Joe Gardner who wants to make it as a jazz musician. With his big break just about in his reach, Joe falls into a manhole and ends up in a coma, while his spirit, in the form of a blue emoji-like figure, is set on the path to become part of the "Great Beyond.”

Joe instinctively realizes that if he were to follow the path there would be no return, and after a struggle, finds himself in the "Great Before,” another part of the afterworld in which baby souls obtain their personalities and find their “spark” —or the purpose of their lives on Earth — with their mentors. Once they find their spark, they are given an earth-shaped badge which allows them to enter Earth and be born.

Joe is willing to do anything to delay his trip to the beyond and volunteers as a mentor by impersonating another soul. His pupil is soul No. 22, who’s been in the Great Before for eons — great souls such as Archimedes, Abraham Lincoln, Mother Teresa and the list goes on — have tried, unsuccessfully, to draw out 22’s “spark” and failed. And the root of 22’s problem seems to lie in the fact that she is more than reluctant to live on Earth. Joe offers a trade-off: He will help 22 find its spark and acquire the earth badge, which will secure his return.

And so their adventure begins.

To be honest, I personally prefer live-action films to animated films, but films like “Soul” make me realize the importance of animation. The way the afterworlds are crafted is so vast, creative and imaginative that no amount of up-to-date CGI technology could make up for it.

Pixar Animation Studios covered a countless variety of characters from objects to bugs, animals and even abstract emotions as the protagonists of their stories, but in essence, the story has always been about people, albeit in different forms. But in this particular film, the story is about a character who can be as real as he can be — there could really be a Joe Gardner somewhere playing jazz in the streets of New York — which is why I believe the story will resonate more with the audience. And the fact that he’d lived a life that wouldn’t have been objectively considered as successful and that he wasn’t originally qualified to be a mentor for the young souls is all too significant when he is able to connect with 22 in a way that no other prior mentors did, highlighting the film’s message even more.

Although the film's release has been delayed several times due to the coronavirus, it couldn't have picked a better timing to console audiences whose lives have been affected by the pandemic. Questions such as, what does it mean to be somebody, the majority’s definition of success or the importance of achieving one’s dreams are definitely important, but Joe Gardner and 22 realize that there’s more than that to living. The story allows the protagonists to have an epiphany without setting an obvious tone or making the audience cringe in their seats from an overload of drama.

There are no post-credit scenes, but there’s an adorable short animated series titled “Burrow,” a lovely story about a rabbit and its adventure in the underground, which is shown before the film begins as a delicious appetizer to warm up the audience.