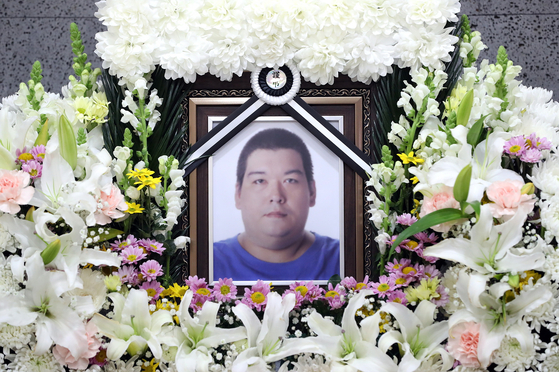 Rapper and broadcast jockey Big Joe passed away on Wednesday evening at a hospital in Gimpo, Gyeonggi. His funeral service is being held at Catholic Kwangdong University International St. Mary's Hospital in Incheon. [YONHAP]


Rapper and broadcast jockey (BJ) Joe Burke, better known as Big Joe, died while undergoing surgery at a hospital in Gimpo, Gyeonggi, on Wednesday evening. He was 43.

BJ Park Hyun-bae, whom the rapper was close with, first reported the news through the streaming platform Afreeca TV.

“He passed away around 6:30 p.m,” Park said. “The funeral service starts on Thursday afternoon. If you were close with him, I hope you are able to attend and pay your condolences.”

Born in 1978 to a Korean mother and an American father, the rapper debuted as Big Joe through hip-hop trio Holla Dang in 2008 with the debut album “Spotlight.” He received attention for his large stature — his height was reported to be 186 centimeters (6 feet, 1 inch) and weight 250 kilograms (550 pounds).

The rapper once lost about 150 kilograms during a weight loss project with a famous fitness trainer Sean Lee, but went on to gain back 220 kilograms.

After 2015 he was mainly active as a BJ on streaming broadcasts and YouTube, and had revealed through another YouTube channel that he would be taking a break due worsening health conditions.

His funeral service is being held at Catholic Kwangdong University International St. Mary’s Hospital in Incheon. He is to be buried at 8 a.m. Saturday in Incheon Family Park.