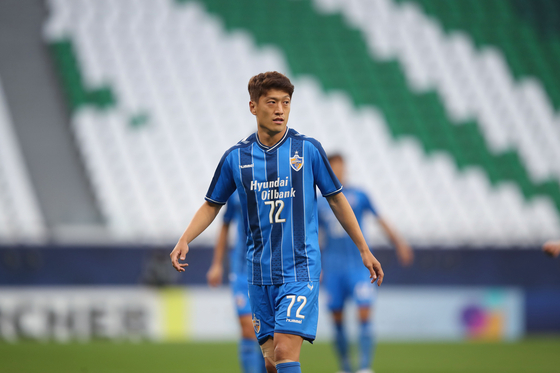 
For Lee Chung-yong of Ulsan Hyundai FC, 2020 was a year to celebrate.

Lee left the K League in 2009 to join Bolton Wanderers in English Premier League (EPL), and his long-awaited return was one of the biggest stories in Korean football last year.

After 11 years in Europe, Lee finally announced his return to the K League after the 2019-20 season, joining Ulsan rather than his former team, FC Seoul.


For players like Lee, who have seen success in Europe, it’s not an easy decision to return to the K League. Lee chose to return to Korea so that he could focus on enjoying the game, rather than competing for a spot at the highest levels of the sport.

But that doesn’t mean he wasn't trying his best on the field. Lee is still playing at his best and his passion for victory hasn’t changed, but he’s given himself some breathing room to look around and simply enjoy being able to play football.

Although Ulsan had some disappointments in the season and finished runner-up in the K League regular season and the FA Cup, they still managed to end the year on a high note, winning the AFC Champions League.

Lee isn't done yet, as he still hopes to achieve a lot more in the 2021 season.

Below are edited excerpts of an Ilgan Sports interview with Lee.

A. I feel like a year passed very quickly. There were a lot of great things happening. I had fun competing, we won a lot and, in the end, we won the Champions League. It was a year to celebrate. I think it’ll be more memorable than other seasons.

Of course, finishing runner-up twice [in the K League and the FA Cup] was disappointing, but I am proud of the fact that Ulsan had the ability to win. Although we finished runner-up, I’m still proud because I know that our players all worked really hard.


Q. This is your second big trophy win, after the League Cup back in 2006. How does it feel to win again?

A. I think I feel happier about winning the Champions League. Since I was young back in 2006, I couldn’t really play a lot. But with this win, I got to play in every game except one. I participated a lot more. I really felt that I joined a team where I can win.


Q. You’ve returned to the K League for the first time in 11 years. How much has changed?

A. The teams that are leading the league have changed. Before, it was Seoul and Suwon. Now, it’s Jeonbuk and Ulsan.

I also think that heading to a foreign league at a younger age is another thing that’s changed.

Compared to the past, each team has their own colors and the way the club operates, including the strategic side, has changed. I think they’re settling as time passes.


Q. You’ll be competing at the Club World Cup starting in February. How do you feel?

A. I’m very excited. We’ll get to compete against teams that we wouldn't normally face. Rather than “we have to win at the Club World Cup,” I'm hoping this will be a good opportunity for player development. I also think that this can help promote the club.

I just hope that we can perform the football we’ve trained and prepared for on the Club World Cup stage. I think it’ll be amazing if we can face Bayern Munich.


Q. If you were to give advice to the young players that’ll compete at the 2021 Tokyo Olympics, what would you tell them?

A. Firstly, I hope the situation gets better so that the Olympics can be held. Since Ulsan have Olympic team players like [Lee] Dong-gyeong and [Won] Du-jae, I’ve been paying close attention.

The Olympics is the last tournament for that age group of national team players. After that, it’s just the senior national football team, so I hope that they can prepare for it without any regrets. Our team had great results at the London Olympics, so it’s not impossible. I want them to have hope.

I hope Dong-gyeong and Du-jae play well so that they can help Korean football. And I know they are good enough players to do so.


Q. Throughout your career, you’ve experienced competing at the Olympics, the Asian Cup, the World Cup and in Europe. You are a role model to a lot of young players. What do they have to do to become like Lee Chung-yong?

A. Well, I don’t really know what to say. I want to tell them that rather than looking for a long future, I want them to concentrate on the current situation. If they prepare well for the tournament being held the next day, then they’ll naturally get great chances. It’s important to have big goals, but I think it’s more important to try their best in every situation.


Q. The qualification rounds for the 2022 Qatar World Cup will soon resume. What do you think about playing for the national team?

A. If I play well for my club, then I feel like I’ll be able to compete for the national team at the Asian regional qualifier. Being on the national team isn’t something I can do just because I want to. If the country adds my name [to the roster,] then I’m ready to try my best at any time.

A. Since I’ve experienced playing at the World Cup, I don’t have big ambitions. I’m just going to try my best until my country needs me. I can think about the World Cup then. At my age, each season can be different, so I’ll have to see how I am next year. To be honest, since there are so many great young players in my position, I have higher expectations for them.

A. In my 20s I had the ambition to get to a higher league, a better club and bigger goals. But that’s changed once I headed into my 30s. Just like how I played in 2020, I want to enjoy the game and I still want to be a good influence to the team. I don’t feel tired or overwhelmed yet. I think football in my 30s is more fun than in my 20s. Since I’ve spent the majority of my 20s in Europe, I can communicate better now that I’m back in Korea. Everything’s just fun.


Q. It’s been a year since you made your return to the K League. Did you ever regret coming back to Korea?

A. If I were to regret it, I wouldn’t have come back. It’s not like I returned to the K League without having knowledge of it. I have no regrets. I had so much fun throughout the 2020 season. I’ve had fun playing football, and we’ve won a lot. Training with great players at Ulsan was also fun.

I hope the players who headed to Europe return to Korea in their 30s, when they’re not too old, and hope to play well in front of Korean football fans. I hope to become a good example of that.

A. I don’t have big ambitions. Just like last year, I hope to play a lot. I’ll prepare for the upcoming season to be more healthy. The team’s goal, which is to win the K League 1 title, is also my goal. In some ways, [I feel like] Ulsan will become a new team. I want to help the team to be consistent throughout the change.