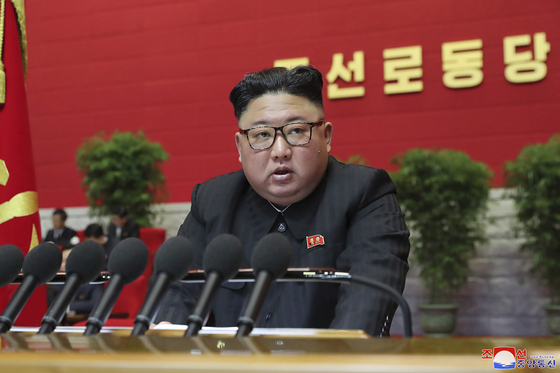 In this photo provided by the North Korean government, North Korean leader Kim Jong-un attends a ruling party congress in Pyongyang on Thursday. Kim has reviewed relations with rival South Korea and underscored the need to drastically improve its ties with the outside world as he addressed a major political conference for the third consecutive day, state media reported Friday. Independent journalists were not given access to cover the event. The Korean watermark on the image provided by the source reads: ″KCNA″ which is the abbreviation for Korean Central News Agency. [AP]


North Korean leader Kim Jong-un has declared an all-out plan to expand and develop the country’s relations with the outside world, while reviewing the regime's ties with the South, the reclusive country's state-run media reported Friday.

According to the Korean Central News Agency (KCNA), Kim announced the policy during the eighth congress of the ruling Workers’ Party. He has been hosting the rare congress less than two weeks before U.S. President-elect Joe Biden takes office.

The congress is reviewing the progress of the party’s work since its last meeting in 2016 and will decide national policies for the coming years. Kim raised the issue of foreign relations and inter-Korean ties on Thursday, the third-day of the congress.

According to the KCNA report, Kim reviewed the relations with South Korea “as required by the prevailing situation and the changed times.” Kim also “declared the general orientation and the policy stand of our party for comprehensively expanding and developing the external relations," the KCNA said.

It is the first time that the North made public Kim’s comments on inter-Korean affairs and foreign relations. No further elaboration, however, was made. After the 2016 congress, the North revealed a lengthy text of the entire report discussed during the meeting.

Experts said it is rare for the North to address inter-Korean and foreign relations at the congress.

Hong Min, director of North Korean Research Division of the Korea Institute for National Unification, said the North may present a completely reshaped South Korea policy. “There is a possibility that an important, positive and reconciliatory message will soon be issued,” Hong said.

Others gave a less optimistic interpretation.

“The North talked about the prevailing situation and the changed times,” said Kim Dong-yup, a professor at Kyungnam University's Far East Institute. “It may declare to completely sever ties with the South. It may seek to expand its relations with China and Russia, not the United States.”

A Unification Ministry official said the government is closely following the events in the North.