3rd round of relief payments start Monday for businesses

3rd round of relief payments start Monday for businesses 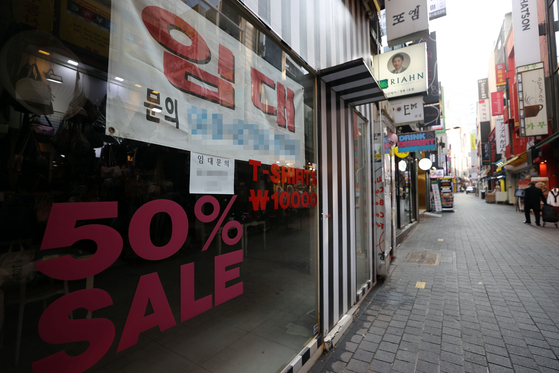 Buildings in the Myeongdong, central Seoul, shopping district are vacant and available for rent in late December. [YONHAP]

Distribution of the third round of relief checks will start Monday for small-business owners and freelancers affected by the coronavirus pandemic, with the end of January set as the target for completion of the allocation.

The Ministry of Economy and Finance said Sunday it will send notifications to small businesses eligible for a piece of the 4.1 trillion won ($3.75 billion) in government subsidies, part of a 9.3-trillion-won third round of coronavirus relief grants.

The distribution starting Monday is for 2.8 million small-business owners negatively affected by the government’s social distancing measures. Restrictions were greatly heightened in late November, with the government prohibiting groups of five or more and imposing a 9 p.m. curfew on indoor operations.

Businesses that were ordered to close for good will receive 3 million won. Noraebang, or singing rooms, indoor sports facilities, night clubs, concert halls and hagwon, or after-school private academies, are included in this category.

Brick-and-mortar operations that were allowed to open with restrictions will be given 2 million won. They include restaurants, cafes, beauty salons, internet cafes, theatres and discount chains.

People that run multiple businesses will not receive compensation for more than one establishment. Businesses that were found to have violated social distancing rules will not be eligible.

The government aims to complete allocation of the 4.1 trillion won this month, except for money going to some 300,000 new applicants who did not receive relief money from the second round last year and are therefore required to submit documents to prove eligibility. Distribution for this smaller group will start in mid-March.

Some business owners have complained that the government’s relief grant plan is flawed as it does not consider unique circumstances.

“Even among restaurants, the damage from the 9 p.m. curfew differs between pubs and bars to operations that mainly raise revenue from lunches or delivery,” said the owner of a restaurant in Jung District, central Seoul. “For the latter, the 9 p.m. curfew’s effect is smaller, and yet they receive the same 2-million-won grant as pubs do.”

“These subsidies are intended to compensate victims, so in principle, grants should be proportional to the amount of damage,” said Prof. Kim Tae-gi of economics at Dankook University. "But a subsidy program led by the central government has its limits in understanding the differences by region and industry, so meeting that condition is practically impossible.”

Lee Sock-hwan, public policy professor at Hanyang University, agreed on the difficulty of the task.

“Setting standards that satisfy everybody is a tricky job, and it takes a lot of time and money to gather information, but doing so is practically impossible because it will delay the golden hour to support businesses,” said Lee.

“There needs to be constant efforts to fine-tune standards to better reflect reality if the government plans for additional rounds of relief grants.”

Relief on the way