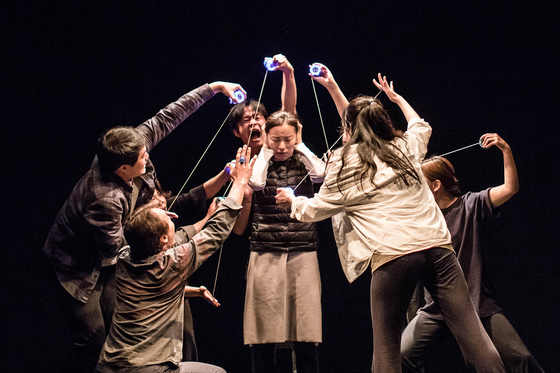 "A Work of an Egg" (translated) by Creative Group Bluebeard premiered at the Arko Arts Theater in central Seoul on Jan. 9 and will run until Jan. 17. [ARKO]


Many have set up their new calendars for 2021, hoping that it will be a much different year from the previous one. But people’s faces are still behind masks, cafes are still closed, and any theaters that are open must make audience members sit two seats apart from each other.

It surely sounds like a very bad time to premiere plays. But on Jan. 8, five new plays began taking their turns on stage at the Arko Arts Theater in Korea’s theater district Daehangno in central Seoul.

For the past 13 years, the Arts Council Korea has been conducting public contests by establishing the annual “Arko Selection” in efforts to discover and support Korea’s playwrights and help great works be realized on stage. The program expanded each year, and it now supports other genres including dance, traditional performance, musical and opera.

There were discussions on whether this year’s edition should be postponed so that the plays can premiere at a less devastating time when more people can come to the theater. But according to Hwang Geum-sil, an official from Arko who manages the theater part for the Arko Selection, Arko decided to push ahead with the program “because it is a devastating time.”

“Even with one-third of the auditorium full, we thought it was important to go ahead with the staging as it is really important for the actors, directors, playwrights and all the staff involved to stop getting interrupted and work on stage to feel alive,” said Hwang. “They’ve already had so many frustrations and discouragements that what we should provide is support, though it may not seem ‘efficient.’”

Five plays have been selected among about a hundred entries that came in during a public contest in 2019. The five pieces are: “Evolution of Love” by theater troupe Gimjang Day; “A Work of an Egg” (translated) by Creative Group Bluebeard; “Nuran Nuran” by Sansuyu; “Road to Cannes” by Lapupuplay; and “Goyeok” by BCC Creative.

"Evolution of Love" premiered on Jan. 8 and runs until Jan. 17 at the Arko Arts Theater in central Seoul. [ARKO]


“Evolution of Love” premiered first among the five plays on Friday at the Small Hall of the Arko Arts Theater. According to the play’s director Lee Young-eun, the play attempts to look at the universal theme of love, but “not just the romantic love, but examine it from various angles.”

“Is love learned? Or is it an instinct? It’s very pure, but at the same time, people seem to consent to violence or ignorance under the name of love,” she said. “We wanted to touch on this topic philosophically, neuro-scientifically and so on.”

“A Work of an Egg” kicked off a day after “Evolution of Love.”

The story takes place in Gyeongju, North Gyeongsang, which was the ancient capital of the Silla Dynasty (57 B.C. to A.D. 935). In a neighborhood of Gyeongju where a female protagonist named Min-chae lives, there’s a Silla Dynasty tomb. The tale of the tomb is that it belongs to a goblin, who turned into a woman who seduced men to eat their hearts. One day, Min-chae discovers a strange document near the tomb and begins to have doubts about this tale that everyone in her neighborhood believes in. She grows up to become an archeologist and goes back to her hometown to excavate the tomb.

Ahn Jeong-min, director and playwright of “A Work of an Egg” said the play attempts to deal with various “attitudes, such as the prefaces of Korean society, its history, the North Gyeongsang region and so on.”

“I also wanted to touch on the duplicity of Gyeongju, which is also my hometown,” said Ahn. “I believe paternalism was deeply rooted in this region, but at the same time it was very liberal, and having Queen Seondeok of Silla reigning for a long time influenced a lot of things. By making the female protagonist an archeologist, which is also a male-dominant career, I wanted to offer a new way of looking at a paternalism.” 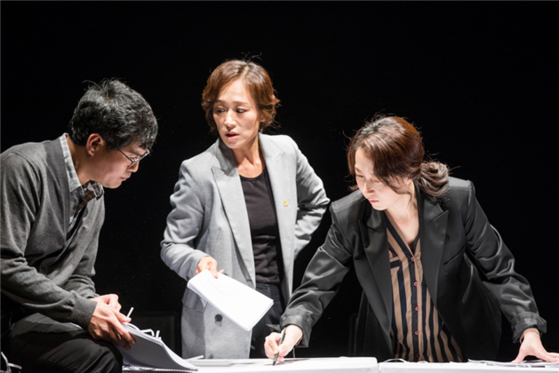 
As for “Nuran Nuran,” Hong Chang-su, the playwright, says he wanted to shed light on the current university system in Korea.

“In this competitive capitalism society, the original essence and the objective of universities are fading away while only competition exists,” he said. “It’s gradually getting destroyed, and I wanted to show where it’s heading toward.” 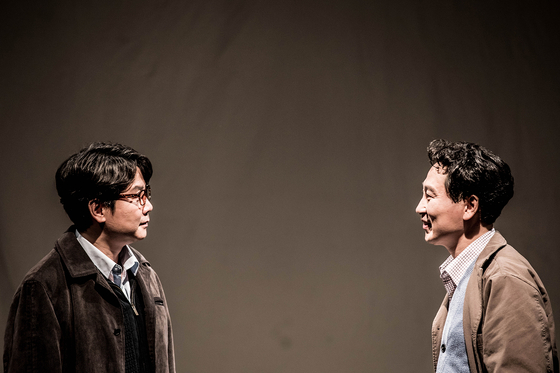 
“Road to Cannes” is about a North Korean spy who gets sent to the South in 1998 to bring home film roles for then-North Korean leader Kim Jong-il, who is known to be a film enthusiast. The spy manages to get his hands on the film roles on the list but fails to get the last one and decides to shoot the film himself. In that process, he meets a South Korean man, who is a former agent of the Korean CIA, and using film as a medium, the two men attempt to overcome various differences including ideologies. 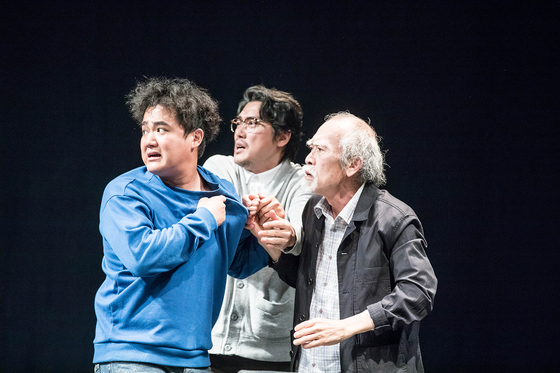 
The word goyeok in Korean means “to toil” in English. As the title showcases, Director Shin Dong-il said that the play attempts to display various hardships human beings suffer in this world. Kim Seong-bae, who wrote the play, said that such hardships are shown through the stories of the Yemeni refugees that arrived on Jeju Island in 2018.

“It was such a big issue back then, and I believe Koreans had mixed feelings about it,” said Kim. “I wanted to touch on this issue and the different goyeok people go through every day and what consequences we can expect from including or excluding others.”