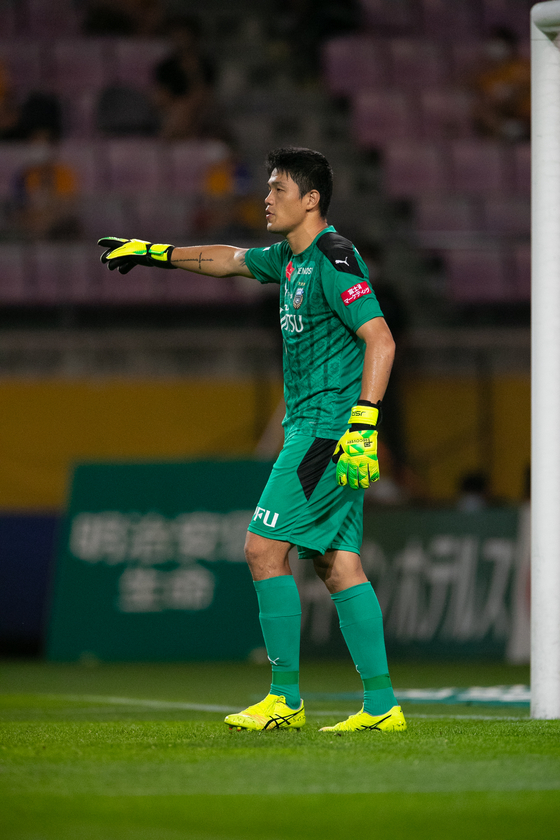 
In the J League, goalkeeper Jung Sung-ryong has the nickname “God.”

Playing for Kawasaki Frontale, Jung has successfully helped his club to two major titles: The J League 1 and Emperor’s Cup.

That nickname might be right for Jung, who has managed to help his club win three J League 1 titles since joining in 2016. Last season, Kawasaki picked up 26 wins, five draws and three losses, totaling a huge 83 points. They were so dominant that they finished a full 18 points ahead of runner-up Gamba Osaka.

Along with Kawasaki’s title, Jung was also named the best goalkeeper in the league, as he allowed 0.91 goals per match. Throughout 34 matches, Jung gave up a total of 31 goals. It wasn’t just his defense that stood out throughout the season. Remarkably, Jung also had a role to play in the team's offense.

“Our team’s strategy was aggressive,” Jung said. “Starting from the goalkeeper, we would aim to cover more from the front and build up an aggressive offense."

Before Jung made his move to Japan, he spent a fair share of his career in the K League. After graduating from Seogwipo High School, the 36-year-old made his pro debut with the Pohang Steelers. In 2008 he moved to Seongnam Ilhwa Chunma, playing three seasons for the team.

Jung spent the most time with the Suwon Samsung Bluewings, where he played for five seasons.

Once the 2015 season ended, Jung joined Kawasaki. After five seasons with Kawasaki, Jung has even started to adopt a Japanese accent.

“I worked really hard to communicate in Japanese with my teammates,” Jung said. “During the match, I regularly tell them to ‘focus’ [in Japanese]. In defense, we’ve become one team. Of the Best 11 in the J League 1, nine players are ours.”

Jung isn't the only Korean goalkeeper making a splash in Japan. Kim Seung-gyu of Kashiwa Reysol, Kwon Soon-tae of Kashima Antlers and Kim Jin-hyeon of Cerezo Osaka are three more Korean goalkeepers that have all found a home in the J League 1.

“There’s no guarantee that a Korean goalkeeper will play [in matches] just because they come to Japan,” Jung said. “Rather than just being better [than Japanese goalkeepers], they also have to survive the competition.”

Although Jung had yet another successful season, the J League 1 wasn't an exception when it came to struggling with the fallout of the coronavirus pandemic. After starting the opening round, the league halted the season, eventually resuming play in July. Due to this, the season didn't end until December.

As the team’s training was also suspended, Jung had no choice but to stay at home for six weeks.

“There were a lot of people testing positive in Japan,” Jung said. “Due to the team’s rules, I wasn’t able to meet up with Seung-gyu and Soon-tae. We just texted each other. I just had a mat on the floor and trained by myself.”

Despite the difficulties the league had this season, by successfully helping his club to another regular season victory, Jung successfully managed to re-sign with Kawasaki.

“I want to try my best every day to protect the goal net,” Jung said. “Just like Kim Byung-ji and Lee Woon-jae, I hope to play for a long time.”

Kim Byung-ji famously continued his professional career until he was 46 years old while Lee played until he was 39. Not only is Jung a veteran, as he’s been playing in Japan for a while, he’s also been separated from his family, who remain in Korea.

“I live separately from my family,” Jung said. “We make video calls a lot. Two of my sons dream of becoming footballers. My eldest son, who is in fourth grade in elementary school, also plays as a goalkeeper. When I miss Korea, I watch Suwon, Pohang and Seongnam matches — the clubs I used to play for.”

Aside from Jung’s performance in the K League and in the J League, he also played for the senior national football team at the 2010 and 2015 World Cup.

Despite those caps, since 2016 he’s been struggling to get his name onto the senior national football team roster.

“[Former Jeonbuk player Lee] Dong-gook said an athlete's goal should be to play for the national team until the day they retire,” Jung said. “I agree. Until the day I retire, I’ll keep on making improvements and show that I’m getting better.”