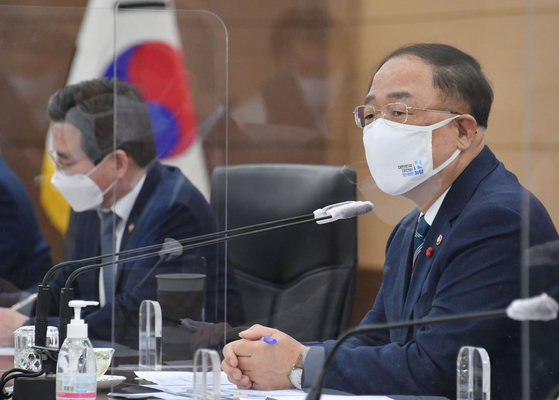 The Korean government has moved a step closer to joining a regional trading bloc after avoiding the subject altogether due to complex geopolitics and the need to lay low.

In two speeches Monday, the Comprehensive and Progressive Agreement for Trans-Pacific Partnership (Cptpp) was mentioned by top leaders and Korea’s application to join was said to be under active and positive review. While nothing decisive was said, the mere mention of the agreement was significant for a government that has been intent on sidestepping comments on it.

During a government economic meeting Monday, Finance Minister Hong Nam-ki said the Korean government will review membership in the partnership.

“In recent years, the WTO [World Trade Organization] multilateral system has weakened,” Hong said. “Mega FTAs such as the RCEP [Regional Comprehensive Economic Partnership] and Cptpp will be the foundations for changes in economic order in the Asia-Pacific region.”

“Not only will [the changes] bring about advances of local systems to meet international trade regulations, but it is a road we have to take amid the acceleration of the digital economy in the post coronavirus era,” Hong said.

The Cptpp was also mentioned by President Moon Jae-in during his New Year’s message on Monday.

President Moon said during the speech at the Blue House the government will positively review joining the Cptpp on top of expanding Korea’s trade cooperation with other regions.

The comments come just ahead of the inauguration of Joe Biden as president and indications that the United States will embrace multilateralism.

During Monday’s meeting, Finance Minister Hong said enhancing cooperation with the Biden government is one of Korea’s leading economic policy strategies for 2021.

With Biden taking over the White House soon, there have been growing expectations the United States will rejoin the Cptpp. In 2017, President Donald Trump pulled the United States out of the Trans-Pacific Partnership, which was renamed the Cptpp in 2018.

Korea became one of the 15 countries, including 10 Asean nations, China and Japan, that signed the RCEP, the largest multinational free trade pact in recent years, in November last year. But the Korean government has been on the fence about the RCEP or the Cptpp so as not to offend the United States or China, economies on which it is highly dependent.

While the Cptpp was not created by the United States, it gained strong support from President Barack Obama, and RCEP was led by China as a counter to the TPP.

Strengthening ties with the new incoming Biden government is important as Korea was accused by the Trump administration of trading unfairly.

While Korea reported a trade surplus for 12 consecutive years, the country’s exports in 2020 shrunk 5.4 percent on year.

Although, Korea’s exports declined at a slower rate than the double-digit fall in 2019, it was the second consecutive year it fell year-on-year.

The figures so far this year aren’t promising. According to the Korea Customs Service, Korea’s export in the first 10 days of this month when compared to the same period last year fell 15 percent.

“In the first half of this year, we will create customized strategies for each country that has a strategic economic cooperation [with Korea],” Hong said on Monday, adding that the government institutions and related agencies will create online platform infrastructure that will provide vital information on overseas markets for Korean exporters.