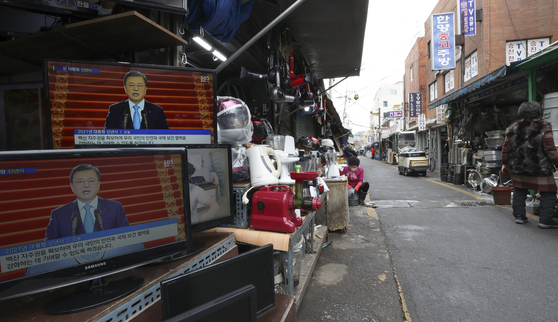 President Moon Jae-in promised free Covid-19 vaccinations for the entire country Monday in a New Year’s address, saying the doses will be distributed in phases starting next month.

Health authorities, however, warned against complacency, saying Sunday’s drastic fall in cases was probably the result of fewer Covid-19 tests administered over the weekend.

Fewer people showed up at testing sites apparently due to the cold, said Yoon Tae-ho, a spokesperson for the Central Disaster Management Headquarters. Plus, private medical facilities that offer Covid-19 testing usually close on Saturday afternoons and on Sundays, leaving only public facilities running.

Officials warned about a growing cluster in a Protestant group in Sangju, North Gyeongsang, to which at least 505 Covid-19 infections have been connected, making it one of the fastest-growing clusters in recent days.

With a few more weeks before the first batch of Covid-19 vaccines arrive in Korea, Moon said Monday in a televised speech at the Blue House that the government looks forward to kicking off inoculations in February, while encouraging domestic labs to invent their own Covid-19 vaccines and treatments.

Vaccinations will be carried out in “the order of priority,” Moon stressed, without elaborating.

According to a distribution draft the government is currently reviewing, patients at hospitals for the elderly, medical professionals and senior citizens aged 65 and older will be first in line to receive the shots. Those nearly 36 million people will be inoculated before November, after which younger adults will be vaccinated.

Teens, children and pregnant women will be excluded from the vaccinations for the time being, given that the vaccines haven’t been tested on them in clinical trials. Vaccines will be considered for those groups once the government verifies clinical test results for them, the plan reads.

The Korea Disease Control and Prevention Agency (KDCA) is expected to announce a final version of the distribution plan later this month after canvassing opinions from medical experts.

Until then, officials are hoping to curb the outbreak through stiff social distancing measures.

Among 451 people who were diagnosed with the coronavirus Sunday, 419 were due to domestic transmission, according to KDCA data revealed Monday morning. 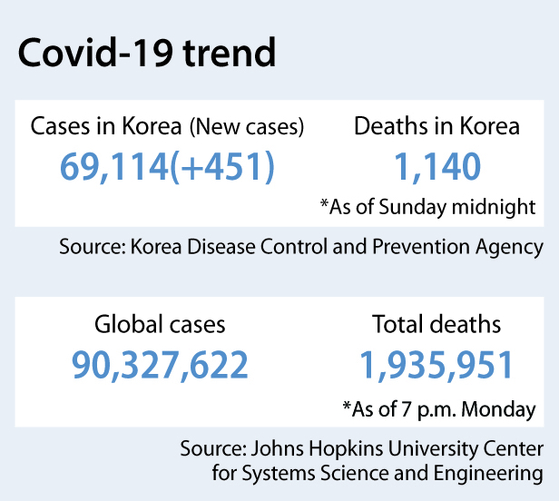 Among Korea’s 17 major cities and provinces, Sejong City was the only place that didn’t add a single new case.

The remaining 32 cases were imported — 11 from the United States, four from Indonesia, two each from the Philippines, Russia, Ukraine, Turkey and Brazil, as well as one each from Vietnam, Pakistan, Romania, South Africa, Tanzania, Nigeria and the Democratic Republic of Congo.

Fifteen patients died, raising total deaths to 1,140, while 2,143 patients recovered, bringing total recoveries to 52,552. As of Sunday at midnight, Korea had counted 69,114 coronavirus cases in all.