FDI at a six-year low in 2020, though second half firm

FDI at a six-year low in 2020, though second half firm 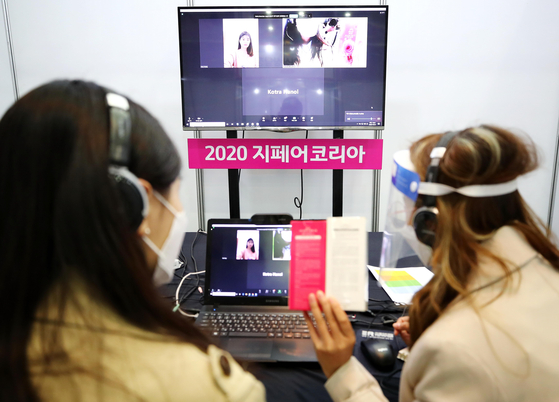 An online consulting of a Korean exporter held during G-Fair Korea held at Kintex, Goyang, Gyeonggi in October 2020. The Korean government said Jan. 12 that it has incresaed its support of online meeting in attracting foreign investors. [YONHAP]


Foreign direct investment (FDI) hit a six-year low in 2020 as the world battled the pandemic.

The result was considered a success of sorts by the government as the second half figure indicates a recovery.

According to the Ministry of Trade, Industry and Energy on Tuesday, foreign direct investment in 2020 amounted to $20.75 billion, down 11.1 percent on year.

Not only did foreign direct investment contract for the second consecutive year, it was at its lowest level since it came in at $19 billion in 2014.

“FDI fell fast in the first half amid Covid-19,” said Park Jung-wook, the ministry’s director-general on cross-border investment policy. “But as it recovered in the second half, we were able to achieve FDI exceeding $20 billion for the sixth consecutive year since 2015.”

Park noted the government’s overall efforts in the second half minimized the impact of the infectious disease. This included K-quarantine and strategic support for promising companies, such as online investment promotion and video consulting companies.

“The FDI’s decline in our country could be evaluated as doing fairly well considering how the global FDI shrunk significantly due to the spread of Covid-19 around the world and the repeated resurgences,” Park said. “The fact that we were able to maintain a FDI of over $20 billion for six consecutive years despite the global economic crisis due to Covid-19 reaffirms Korea as a safe investment.”

The ministry cited a study by the United Nations Conference on Trade and Development (Unctad), which estimated global FDI in 2020 to have shrunk 30 to 40 percent year-on-year. In the first half of last year, global FDI contracted 49 percent.

Investments in Korea were focused on new industries, including data harvesting, biopharmaceuticals and artificial intelligence, whose potentials were boosted by the pandemic due to the boom of remote work and school and delivery.

According to the government, new industry investments increased 9.3 percent to $8.42 billion. It is the first time this sort of investment accounted for 40 percent of all FDI, up from 33 percent the previous year.

The government forecasts a choppy 2021, citing Unctad’s projection of global FDI shrinking 5 to 10 percent this year, with recovery starting in 2022.

It also raised concerns on several risks that may hold back major global investors, including the resurgence of the virus, a new U.S. government and Brexit.

The competition between the United States and China over taking the lead in global technologies is also considered as another risk factor.

The ministry said one of the advantages that Korea has is the country’s quarantine efforts, its free trade network that now connects it to 84 percent of the global markets and high international credit score.

This year, “we will take a strategic approach that will help attract investments into materials, equipment and parts and the Korean New Deal,” cross-border investment policy director-general Park said, adding that it will attract major foreign investors by offering customized incentives.