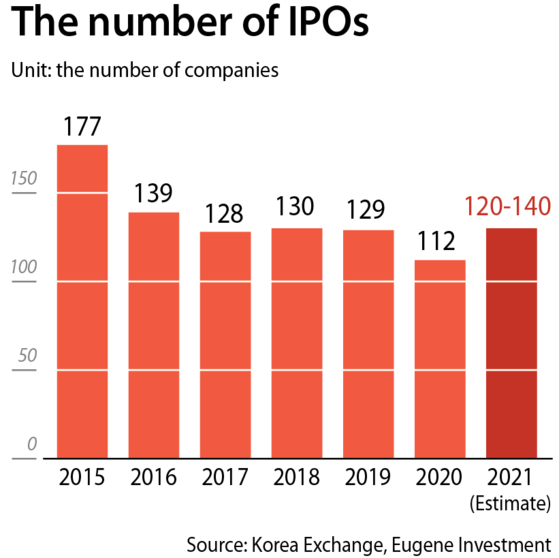 IPO mania is set to continue into 2021 as interesting new issues hit the market, punters borrow to invest and memories of strong offerings in 2020 linger in the minds of the hopeful.

Despite a slow start and a weak market early last year, Korea logged the most IPOs in three years in terms of stock sold.

Last year, a total of 5.9 trillion won ($5.38 billion) was raised for IPOs, the highest in three years, according to a report from Eugene Investment.

It all began to turn around in July 2021 when money-losing SK Biopharmaceuticals went to market and jumped four-fold within days, hitting the stops all the way up.

Despite the fact that the stock has drifted down since peaking within days, retail investors remain enthusiastic and are willing to go into debt to get on the IPO train.

“I took out an overdraft account to invest in IPO stocks because it seems like a loss not to invest in IPOs in this kind of bullish market with such high liquidity,” said 28-year-old office worker Cho Soo-rim. “I’m very excited about this year’s IPOs because I believe more firms will try to go public on the back of the hot IPO market.”

For 2020 IPOs, they gained on average 90.3 percent when their offering price is compared with their price on the last trading day of the year, according to Eugene Investment. Vaxcell-Bio Therapeutics, an immunotherapy developer, gained 1,015.3 percent

LG Energy Solution, an LG Chem lithium-ion battery maker, is expected to have an initial market cap of 40 trillion won and 50 trillion won.

Krafton, the gaming company behind “PlayerUnknown’s Battlegrounds,” has an expected market value of 20 trillion won and 30 trillion won.

SK Bioscience is a drugmaker that has made headlines as a manufacturer of AstraZeneca’s Covid-19 vaccines under a consignment deal. Its value will be around 3 trillion won, while SKIET, which specializes in making lithium-ion battery separators for electric cars, is expected to be valued around 5 trillion won.

Startups like Yanolja, a reservation app for accommodations and leisure activities, and e-commerce operator TMON are also planning to go public this year.

The exact date of their listings have not yet been confirmed.

“Covid-19 vaccines and treatments are being speedily developed and distributed, but it is likely for the government to maintain the current monetary policy, which would keep the liquidity high, and ultimately raise more active participation in the IPOs,” said analyst Na Seung-doo from SK Securities.

Between 120 and 140 companies are expected to go public this year, up from 112 last year, which is projected to raise a record high of around 10.5 trillion won to 12 trillion won to the IPO market, according to Eugene Investment. Over the past five years, the average amount raised for IPOs was annually 5.5 trillion won.

The IPOs include Kospi listings and those listed on the Kosaq market and Konex, a securities exchange exclusively for small and medium-sized enterprises and venture companies.

A move by the Financial Services Commission to increase the allocation of IPO shares to retail investors is also expected to drive interest this year.

The revision raises the amount of publicly offered shares allotted to retail investors from 20 percent to as high as 30 percent of the total. Also, the deposit system will change, so that all small investors making a minimum deposit will receive an allotment. Shares had been divvied up by size of deposits.

Brokers warn that the IPO mania could end up costing the small investors. Because valuations have been driven up so high, the chance for gains is lower and the odds of losing money is higher.

If IPOs attract a lot of attention, funds get concentrated in the market, said analyst Choi Jong-kyoung from Heungkuk Securities. “This drives up IPO prices.”